FLORHAM PARK, N.J. -- Former New York Jets star Darrelle Revis is five years removed from the NFL, living his best life as an entrepreneur in Florida. He invests in real estate, collects fine art and is developing his own lifestyle brand. He's not one of those retired players who tries to relive his glory days by watching football every Sunday or hawking autographs at stadium tailgate events.

In cornerback parlance, he's enjoying "off" coverage after 11 years of relentless man-to-man.

But Revis hears things, and he knows there's a commotion in New York over a rookie cornerback with a catchy nickname and a precocious game. Sauce Gardner, who leads the league with 13 passes defensed, is building a reputation that glitters more than the "SAUCE" chain he wears around his neck after games. His interest piqued, Revis now sees what the fuss is about.

"When you come in as a rookie, you want the elite players you're playing against to respect you, and the only way you do that is be a playmaker," Revis told ESPN. "I think Sauce has the word 'playmaker' written all over him."

Revis' words carry weight. The seven-time Pro Bowler is the greatest cornerback in Jets history and one of the most accomplished defensive players of his generation, the creator of "Revis Island" -- that infamous tourist trap where wide receivers routinely got lost and disappeared. He last played for the Jets in 2016, though his All-Pro years with them were 2009 to 2011.

Now, finally, they might have an heir to the throne.

The Jets found both corners at Midwestern schools -- Revis at Pitt, Gardner at Cincinnati. They were first-round picks, 15 years apart, both 22 years old when they got the call. Growing up in Detroit, Gardner studied old Revis highlights on YouTube. He marveled at the way Revis was so locked in that he was able to anticipate the receivers' pass routes.

"I love how good he was and how he played the game," said Gardner, who dug so deep into the Revis video archives that he found clips of his draft day.

Gardner and Revis spoke briefly by phone after Gardner was drafted, arranged by the Jets' public relations staff, but there hasn't been any in-depth shop talk. The rookie welcomes that conversation, a chance to learn from the man whose press-coverage technique was legendary around the league.

Gardner's coaches and teammates say he's ahead of the curve in terms of his cerebral approach, but he wants to go next-level -- Revis level. His every-day role model is fellow corner D.J. Reed, a voracious film watcher. Reed walks the hallways at the Jets' facility while studying film on his tablet. That sort of dedication blows away Gardner, who hopes to raise his film-watching game outside the classroom.

"We've got these long hallways and that's like two minutes worth of film," he said. "I try to sometimes, but I have to make it become a habit. D.J. does it all the time." 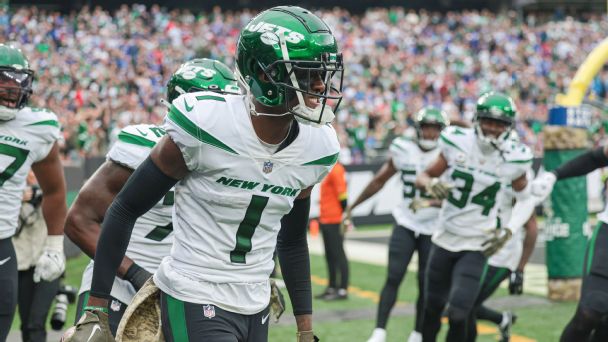 How do the NFL's best rookies stack up? Here's our top 10, who fell just short and risers to watch. Midseason ranking

Gardner still prides himself on being a studious player. Asked if he is a copious note taker in meetings, he reached for his knapsack and pulled out a spiral notebook with a Jets helmet on the cover. He opened the notebook, revealing pages and pages of neatly written notes on every line -- first- and second-down tendencies, third-down tendencies, you name it.

Revis was the same way. For every hour of on-field brilliance, there were 15 hours of film study and body maintenance.

"The biggest thing, in order to play fast, is film study and having a high IQ for football," said Revis, who will be inducted into the Jets' Ring of Honor on Nov. 27. "It seems like he’s a student of the game, and he’s ready to take any challenge on when it comes to playing at a high level."

There will be comparisons, naturally, because that's what we do. Is Gardner the next Revis?

That's a lot to put on a young player. Gardner already is on record as saying he'd like to become the best cornerback in history, but he was reverential when Revis' name was mentioned to him.

"It's still my rookie year, so I'd probably say it's still under construction," he said. "I'm not going to get too far ahead of myself, because he did way more good things than I've done. I'm going to make sure I stay humble."

Still, it's fun to play with the stats. For instance: Among Jets rookies since 2000, Gardner surpassed Revis to become the only one to register at least 10 passes defensed and two interceptions in the first nine games.

Gardner has allowed a 47% completion rate as the nearest defender, eighth among cornerbacks with at least 25 targets, according to NFL Next Gen Stats. His ballhawk rate (25.5%) -- the percentage of targets in which the nearest defender makes an interception or pass defensed -- ranks third in the league.

"He's like Revis, except in (Antonio) Cromartie's body," said Jets defensive end Vinny Curry, referring to the 6-foot-2 former Pro Bowl corner who played from 2006 to 2016 (including five years with the Jets).

At 6-foot-3, with 33 1/2-inch arms, Gardner's body type is unusual for the position because "long" players tend to struggle with short-area quickness. Not him. His change-of-direction skill is superb, along with his ability to sink his hips and make fluid turns. At 5-foot-11, Revis did it all, but was known for frustrating receivers with his press coverage.

One common thread is their confidence. Defensive coordinator Jeff Ulbrich calls it "the Superman mentality," a cornerback's belief that he will never be beat. Revis had it at an early stage. His first game was against Tom Brady and Randy Moss of the 2007 Patriots, who went undefeated in the regular season. Revis said he thought to himself, "I used to watch these guys. This is crazy."

After that initial wide-eyed moment, he locked in.

"I just kind of told myself, 'If I had all this hype coming in, I just have to play up to the hype,'" Revis recalled. "I think my message to Sauce would be the same because I think we have some similarities in terms of being very confident players, especially at a very young age. I would say to him, continue to build on that confidence because there’s no ceiling for that confidence."

Gardner traces his mentality to his upbringing.

He was raised in the Seven Mile section of Detroit, on the corner of Rowe Street and Seven Mile East. Gardner said it was a rough neighborhood with the constant fear of gun violence. But he believes that environment forged his character.

"I feel like most people from Detroit are confident guys," he said. "They believe they can't be beat."

One significant difference between Gardner and Revis: Unlike Revis, Gardner isn't asked to play a lot of man-to-man coverage. The Jets play zone on 66% of passing downs, per ESPN Stats & Information. Under former coach Rex Ryan, Revis matched up against the No. 1 receiver in man-to-man, sometimes with no safety help.

It was an unusual, but highly effective strategy. It was physically taxing but Revis was up for the challenge. As he said, "If this was a way for me to help the defense shut down the best guy, I would raise my hand and say, 'I’ll take care of it, Rex.'"

Unless the Jets overhaul their defensive philosophy, Gardner may never get a chance to play the Revis way. That hasn't prevented him from earning rave reviews from across the league.

"For him to be having a good season with the receivers he’s played, that’s incredible for a rookie," said Cleveland Browns wide receiver Amari Cooper, who faced Gardner in Week 2. Cooper said Gardner has "more tools than most good corners" and that he's "quicker than the supposed quick guys."

Buffalo Bills coach Sean McDermott said Gardner is "a No. 1 corner for them, it appears. He's been all that's been advertised about him. ... He'll be tough to deal with in the years to come, for sure, and he already is this year." Patriots offensive playcaller Matt Patricia called him "a very talented player. He's big and long. He's got good quickness, good speed. He's hard to throw over."

Gardner might be the Jets' most popular non-quarterback rookie since wide receiver Keyshawn Johnson in 1996. He will have to learn to deal with his celebrity, which can be tough in a place like New York. Once Revis established himself, he was so big that he was featured on CBS' "60 Minutes" and on the cover of national magazines. During a playoff pep rally in January 2010, Manhattan was "renamed" Revis Island by then-mayor Michael Bloomberg.

"I think the biggest thing is, Sauce has to embrace the city, and the city is embracing him back by his play," Revis said. "I think it's great to have that electric energy from the city for players like Sauce. Once he understands he can embrace it, he can be a fan favorite for a very long time."