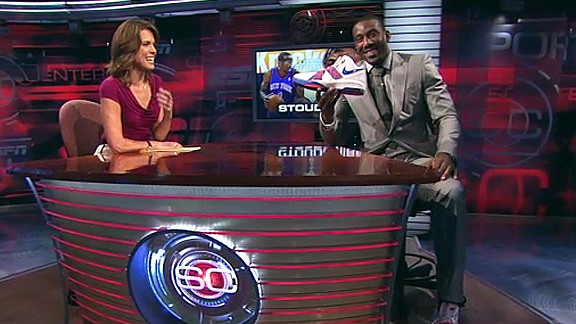 After Amare Stoudemire announced during the summer via Twitter that he was exploring a new sneaker deal, industry experts thought STAT may become the lead endorser for Under Armour or Li-Ning, two up-start apparel and footwear companies. Especially because he had been playing in a Nike cross-trainer, the Zoom Huarache Trainer, during the 2010-11 NBA season.

But Stoudemire is not only back to a basketball sneaker, but he's back with Nike. On Tuesday, he visited ESPN's Bristol headquarters to promote his new shoe, the Nike Air Max Sweep Thru, which debuted in stores today.

Retailing for $85, the Sweep Thru is a strapped-up, mid-cut basketball sneaker with a breathable mesh tongue, Phylon midsole, visible Max Air unit and herringbone traction pattern rubber outsole. It resembles a bit of the Zoom Huarache Trainer with its velcro straps, which Stoudemire has stated he loves.

On Friday, Carmelo Anthony will be doing his own shoe launch for his Jordan Melo M8 at the House of Hoops in Harlem with hip-hop artist Jadakiss MC'ing the event.