NEW YORK -- If we're being honest, it's way too early to talk about Derrick Rose's future in New York.

He has played all of 19 games with the New York Knicks and free agency is eight months away.

But Rose's future has been a large part of the public conversation around the Knicks over the past three days.

First there was a report about New York considering offering Rose a three-year, $75 million extension. Then Rose said in an interview that he can see himself playing in New York "for the rest of my life." 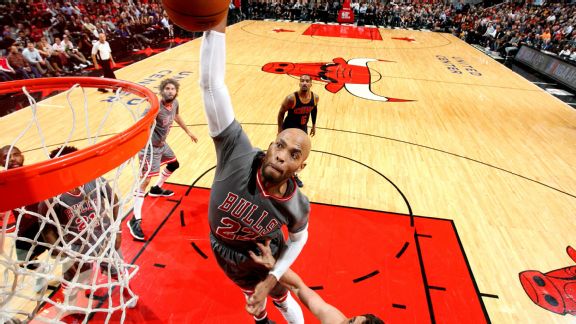 Taj Gibson stuffed the stat sheet Friday and left LeBron and the Cavs looking for answers.

On Friday, when asked to expand on those thoughts, Rose said the following:

"I love the atmosphere [in New York], I love the environment, I love the staff here, I love the team. ... My job is to come out here and play as hard as I can and try to win every game while I'm on the floor. But as far as my future and everything, who knows? I'll have to wait until the end of this year and figure things out, but I would love to be here though."

If you're a Knicks fan hoping Rose remains the point guard for years to come, you like Rose's answer there. If you're a fan who prefers the Knicks chase a free agent such as Chris Paul or Kyle Lowry come summer, or re-sign backup Brandon Jennings, you have different feelings.

But the most important words from Rose on Friday had nothing to do with his pending free agency. And they didn't have anything to do with a possible extension. They were about where he is -- and how he feels -- after his first 19 games in New York.

"It's all about rhythm," Rose said, "and my rhythm is coming."

If that's the case, then this Knicks team is in good hands with Rose running it. New York beat the Minnesota Timberwolves 118-114 on Friday for its seventh win the last 10 games. The victory moved the club one game over .500. At 10-9, this is the latest in the season the Knicks have been over .500 since 2012.

And Rose has played an important role in New York's solid start.

His numbers are similar to last season's (16.8 points, 4.8 assists and 4.2 rebounds, 44.5 percent shooting). But he's given the Knicks an element they haven't had for the past two seasons: a penetrator. Rose averages 10.1 drives per game, one of 12 guards to average more double-digit drives per game, per the NBA's player tracking site. He's shooting 55 percent at the rim, which is fifth-highest among players with at least 10 drives per game, and 4 percent higher than he did last season.

But the most important number for Rose, of course, is zero. That's the number of games he has missed because of injury.

Early-season health has allowed Rose to get acclimated to Jeff Hornacek's offense and develop chemistry with Kristaps Porzingis, Carmelo Anthony and the rest of the Knicks. Rose has said several times he's taking a different, less aggressive, approach on offense in New York than he did in Chicago. That translates to less forced shots and more passes.

"I'm still learning [the offense]," he said late Friday. "I'm still trying to pick and choose my spots, play the way that I normally play but without taking away from the team. ... All the attempts that I took in Chicago, there's no need here."

So Rose is getting comfortable in New York and the Knicks are playing well. That bodes well for both the Knicks' present and Rose's potential future in New York. But anything -- positive or negative -- can happen over the next three and a half months. So all discussions about Rose's long-term future with the club can wait.

O'Quinn on the spot: Kyle O'Quinn gave the Knicks the lift they needed at center Friday. Starting in place of the injured Joakim Noah (ankle), O'Quinn had 20 points and 13 rebounds in 31 minutes. He also had two blocks, one of which was on Karl-Anthony Towns in the closing minute. Porzingis rejected Towns after O'Quinn on the same possession, a sequence that essentially sealed the Knicks' victory.

The Knicks are 4-0 when O'Quinn starts at center. But it doesn't sound as though Hornacek is ready to insert him into the starting lineup permanently. O'Quinn said that Noah has been helpful in advising him from the sideline.

"At the end of the day, Joakim didn't go [anywhere]," O'Quinn said. "He was talking to me, giving me knowledge." Aside from Noah, most of Phil Jackson's recent additions have played well thus far. Mindaugas Kuzminskas, Justin Holiday, Willy Hernangomez, Rose and Jennings have all made strong contributions for the Knicks early on. And opposing scouts and coaches have credited Hornacek, the first-year coach, for making strong decisions with his rotations in the first 19 games.

Strong night for Melo: After missing 46 of his previous 60 shots, Anthony found his stroke Friday. He finished with 29 points on 9-for-20 shooting and hit 5 of 10 shots from beyond the arc. Afterward, Anthony said his legs felt strong after a day off Thursday. It sounds as though the recent schedule wore on him a bit.