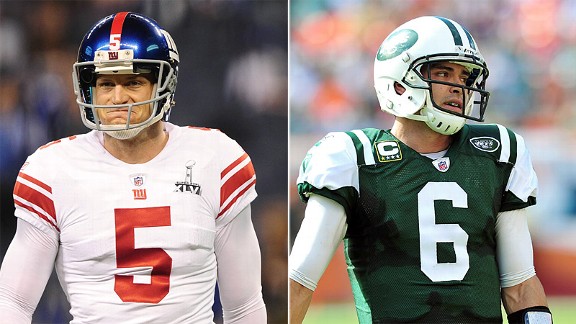 Steve Weatherford and Mark Sanchez.Mark Sanchez has received a lot of criticism this offseason, the latest coming from an unlikely source -- the punter.

Wait, make that the ex-punter.

"That's a lot to take on as a rookie. But as the years go on, I think you're expected to mature, skill-wise, and also mature as a leader, and to be honest with you, as much as I like the guy, I just haven't seen that."

Weatherford has been removed from the Jets for a year. He was Sanchez's teammate in 2009 and 2010, when they reached back-to-back AFC Championship Games, but the Jets decided not to re-sign Weatherford last offseason. He landed with the Giants and, lo and behold, he was a pivotal player in their championship run, landing a new contract.