Breaking down the Jets, position by position, as they head into training camp:

Player to watch: Tebow will be one of the most closely watched players in the NFL. Why? Because he's Tim Tebow. Another reason is because of his role: What is he? The Jets say he's the No. 2 quarterback and will be used in the Wildcat package. They haven't divulged any specifics, but it'll probably be closer to the read-option offense he ran in Denver than a true Wildcat, which is a direct snap to a running back. Team insiders say the plan is to use Tebow in the red zone, where they can replace Sanchez with another player/blocker to bolster the running game.

Potential strength: Depth. For a change, the Jets have a legitimate backup instead of an delicate antique. (No offense, Brunell.) Sanchez and Tebow are proven winners with playoff victories on their resumes. That could be a big intangible -- assuming a quarterback controversy doesn't ruin everything.

Potential weakness: The obvious concern is the question of whether Sanchez and Tebow can coexist without dividing the locker room, but we're going to get technical here and raise the issue of ball security. Sanchez had 18 interceptions and 10 fumbles (eight lost) last season, Tebow six interceptions and 13 fumbles (six lost) -- way too many loose balls. Sanchez can reduce the number by cleaning up his mechanics while in the pocket.

Wild card: Sanchez's psyche. Comedian Rob Riggle nailed it during the ESPYS telecast when, referring to Tebow and his popularity, he looked at Sanchez in the audience and cracked, "Good luck with that all season." Sanchez laughed. Will he still be laughing in a few months? His ability to block out the Tebow distraction will go a long way toward determining how the season plays out for all parties. For the most part, Sanchez has been a mentally tough player, but his psyche was shattered by the end of last season. He needs to take a playoff mentality every week, because he's at his best in the big games.

We want to hear your thoughts on the Sanchez-Tebow drama. 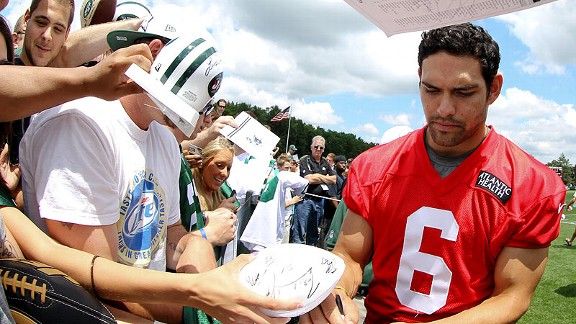 Will Mark Sanchez be able to handle Tebow Time in New York?