The man who made a career of delivering the ball to Joe Namath still prides himself on the center-quarterback exchange. Just like old times, John Schmitt is the initiator, especially when the calendar says Jan. 12. Instead of snapping, he's yapping.

"Every year, I always call Joe and say, 'Hey, remember this day?'" the old center said with a laugh that shook his entire body.

Fifty years later, the game is remembered as one of the biggest upsets in sports history. The Colts were an 18-point favorite.

The game is remembered for Namath's guarantee, delivered in an era when bold words weren't accompanied by a hashtag.

It's also remembered for how it changed the landscape of professional football, prompting the old-guard NFL to merge with the AFL hipsters in 1970.

For the men who lived it, the 34 surviving members of the Jets' only championship team, it still feels pretty damn good. They laugh, they cry and they recall in vivid detail how they crashed the party, embarrassed the hosts and drank their champagne. (Yes, they really did.)

"Yeah, I have memories of it," Namath told ESPN, speaking by phone from his home in Jupiter, Florida -- 90 miles north of the old Orange Bowl.

"Coach [Bear] Bryant told us something when we were freshmen," said Namath, referring to his legendary coach at Alabama. "He said we'd remember the bad times -- the losses -- more than we'd remember the good times and all the wins. And he was right. I remember the Kansas City (AFL) championship game in Shea Stadium in 1969. I don't like that memory, but it comes to mind. I remember when we lost to Texas in the Orange Bowl. A couple of losses come quick to the mind."

For Namath, the No. 12 holds a special place in his life, a kismet attachment to the people and things he holds dearest. His mother was born in 1912; his oldest daughter, Jessica, was born on Oct. 12; his other daughter, Olivia, was born in the 12th month, December; and he wore No. 12 at Alabama and with the Jets. In fact, he was a trailblazer in that respect. Six modern-era quarterbacks in the Pro Football Hall of Fame donned No. 12 on their jersey, but Namath was the first.

With the win 50 years ago, Joe Cool and his gang made front-page news across the country, sharing space with stories about an anticipated withdrawal of U.S. troops in Vietnam. In the heartland, the Indianapolis News placed the Super Bowl upset above the masthead, with a tabloid-like headline across the top of A1: "'Big Mouth' Joe Now Biggest Superstar."

In a year known for historic milestones and music in the mud -- Neil Armstrong's moon walk and Woodstock would happen months later -- the Jets fit in because they rattled the establishment with an out-of-this-world accomplishment.

You see, the AFL had been deemed the inferior league, and despite an ongoing merger with the NFL, there was uncertainty about which franchises would survive. As the Jets prepared for the Super Bowl, they heard rumblings that another loss for the AFL could have severe ramifications. The NFL's Green Bay Packers had won the first two Super Bowls, and now a victory for the Colts could be crippling to the AFL.

"I'm not trying to make it too dramatic, but I think it's a fair statement that [Super Bowl III] was the turning point in relation to where football is right now," said Bob Talamini, who started the game at left guard. "It was set in motion that afternoon, and there was no turning back for the NFL. They knew damn well they had to come to the table, if you will. It was a big turning point in pro football. That was not supposed to happen. What was supposed to happen was we were supposed to get our ass kicked, and then the AFL would dissolve except for a few teams. That all went in the trash can when we beat them."

The Jets felt the weight of the civil war between the leagues during the run-up to the game, and they also faced the daunting prospect of playing against Don Shula's Colts. Schmitt, the center, recalled bumping into AFL players at the Jets' hotel in South Florida, a memory that made him choke up. He was a tough SOB in the trenches -- he actually played the Super Bowl with pneumonia -- but Schmitt gets mushy when it comes to nostalgia.

"All the guys we played against in the AFL -- even the guys from the Oakland Raiders, who we hated -- they came over to our hotel and said, 'Win it for us, win it for all of us,'" Schmitt said. "It was so great. All the teams in the AFL came to our hotel to wish us luck. I'm dead serious. To a man. To a man. We weren’t playing for just us."

As if they needed extra pressure, the Jets woke up Friday morning to a jarring headline in the Miami Herald: "Namath Guarantees Jets Victory." The night before, receiving an award at a Miami Touchdown Club banquet, Namath responded to a heckler in the crowd who said the Colts were going to kick the Jets' ass. Broadway Joe told the wise guy in the crowd -- and, by extension, the entire world -- the Jets would pull off the upset.

"I guarantee it," Namath declared.

If this had been the Twitter/cellphone age, Namath's bold words would've gone viral in seconds. But in 1969, the news held until the next morning's newspaper. Coach Weeb Ewbank read the quotes, stormed into the team breakfast and confronted a bleary-eyed Namath, who was sitting with his starlet girlfriend, Suzie Storm. The players who witnessed the exchange knew Ewbank was furious because he referred to Joe as "Joseph."

Namath took the paper, read the quotes and fessed up. Yeah, he said it.

"Well, Coach, you’ve been telling us all week we’re supposed to win," Namath told Ewbank, according to eyewitnesses. "Don’t you think we’re going to win, Coach?"

Some players tried to hide their smiles; others were angry because they felt Namath had provided bulletin-board material to the Colts. Ewbank walked away fuming.

Ewbank's anger was justified; Namath's guarantee ticked off the Colts. Schmitt said the Colts came at the Jets with a fury he'd never experienced before. The first quarter, he said, was as physical and violent as any quarter of his career. Schmitt, who received a penicillin shot for pneumonia only a few days before the game, was spitting out grass blades after getting pancaked on a couple of plays. 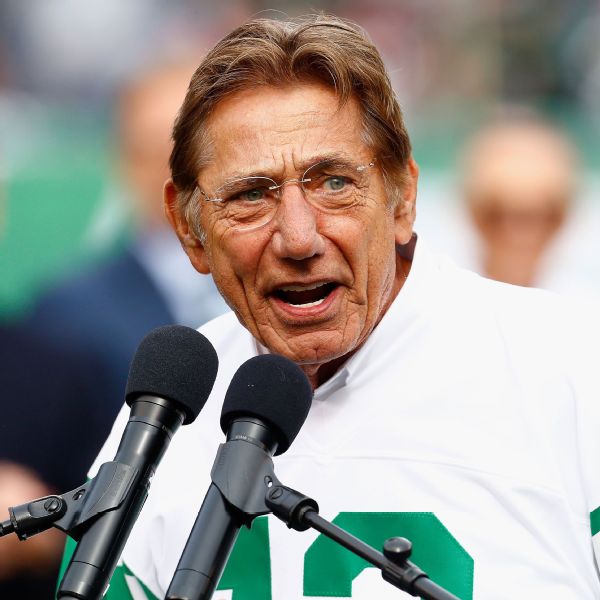 Adhering to Ewbank's season-long mantra, "poise and execution," the Jets didn't panic. They withstood the initial surge and eventually wore down the mighty Colts. There were many heroes. Matt Snell, the gifted fullback, rushed for 121 yards and a touchdown. (After the game, Namath told Snell it was he, not Namath, who deserved the MVP.) The late George Sauer caught eight passes for 133 yards. Jim Turner kicked three field goals. The defense, best in the AFL, forced five turnovers, including two interceptions by Randy Beverly.

As for Namath, it was an atypical performance in that he didn't put up crazy passing numbers (17-for-28, 206 yards), but the most overlooked aspect of the game -- then and now -- is how he dismantled the Colts with his brain. The pretty-boy quarterback with the breathtaking right arm outsmarted them by calling audibles on every play.

Using their knowledge of the Baltimore defense -- Ewbank had coached the Colts -- the Jets devised a check-with-me system that allowed Namath to change plays at the line based on the Colts' front. It turned into a cat-and-mouse game. If the Colts shifted to the weak side, Namath audibled at the last second to the strong side. It befuddled the Colts.

Incredibly, Namath never watched a replay of the game, start to finish, until recently. He wasn't thrilled with his performance, sensing that he missed a few throws, but the enduring beauty of his game was how he led the team. The sport's biggest star -- a cultural icon who dated the most famous women in Hollywood -- was one of the guys on the grandest stage of them all.

To this day, Namath, a 75-year-old grandfather, tries to live by the tenets that fueled that championship team -- poise and execution.

"There aren't many days go by that I haven't remembered how important it is to keep one's poise," he said. "It doesn't apply strictly to football. My children have heard me, time and again, talk about keeping our poise and the way you go about things. That word -- execution -- comes only after preparation. It has come back to an individual thing with me, what I try to teach my children."

During his phone interview with ESPN, Namath paused a moment to speak with one of his daughters. After a few seconds, he said to her, "I love you, too."

Oh, my, how times change.

The 25-year-old Namath was a party animal who once said he liked his women blond and his Johnny Walker red. After the Super Bowl win, he celebrated with his girlfriend at a Miami nightclub, where he ran into Frank Sinatra. They shook hands and Namath accidentally spilled a drink on Sinatra, who, to the amazement of many, shrugged it off. Namath, who needed police escorts to get around town, was that big.

The Jets drank champagne that night, but it belonged to the Colts, whose owner -- not in a drinking mood -- sent it to the Jets' hotel. Good thing, because they didn't have their own. Many of the players gathered at the hotel bar to toast their improbable victory. Sauer and Earl Christy, the kick returner, did their own thing, jumping into the pool with their clothes on. The party at the bar didn't last long because Ewbank, known for his frugality, didn't want the team's owner to get hit with an outrageous bar tab. It ended before 11 p.m.

"He said, 'That’s it, the bar is closed,'" said Gerry Philbin, the star defensive end. "So I jumped behind the bar, I remember, and I started pouring drinks. He got really pissed off. He said, 'Get out of there.' I had to get back and stop serving the drinks. He ended the party a little too early, I thought."

Schmitt, so drained because of the pneumonia that he collapsed during the postgame prayer in the locker room, retired to his hotel room with his family and watched the tape delay of the game.

"I wanted to see if we really won," he said, laughing.

The Jets really won. And their victory never gets old.