Earlier in the season, Iman Shumpert, who wears the adidas MisterFly sneakers during games, left the Garden one night sporting kicks with literally wings on the back. Everyone in the locker room looked down. Even Carmelo Anthony gushed about them. They were the adidas Jeremy Scott JS Wings 2.0. 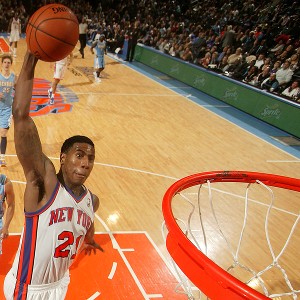 Iman Shumpert will take flight at All-Star Weekend in Orlando.

The Knicks haven't had a high-flying shooting guard like Shumpert arguably since John Starks, and now the rookie will be taking his mid-air talents to the Sprite Slam Dunk contest at All-Star Weekend in Orlando. The announcement was made by the NBA on Thursday morning.

"I received a call from my agent that I was invited," Shumpert said. "I'm going to bring a whole lot of style points. My favorite dunk memories are [Michael] Jordan winning it all and Vince [Carter] going crazy and revolutionizing the dunk contest!"

The event will feature a series of firsts, including four first-time participants, a new single-round format in which the winner will be chosen solely by fan vote and the introduction of fan voting via Twitter.

Shumpert, who launched his official Facebook page today, will be competing against Indiana's Paul George, Houston's Chase Budinger and Minnesota's Derrick Williams, who will all vie for the title on Feb. 25 at the Amway Center. Tune in on TNT at 8 p.m. ET.

Sources say Jeremy Lin has been invited to take part in the festivities as well. Those with knowledge of the league's plans told ESPN.com that Shumpert will be enlisting Lin to "assist" him in a manner similar to the help 2011 champion Blake Griffin got from then-Los Angeles Clippers teammate Baron Davis.