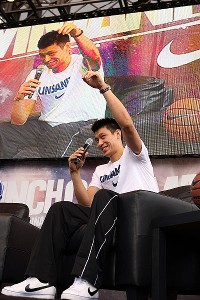 Jeremy Lin appeared at a Nike event in Orlando on Saturday.

ORLANDO, Fla. -- If Kobe Bryant ever owns a team, his personnel department better not overlook a guy like Jeremy Lin.

Bryant said he is still amazed that nobody drafted Lin and two teams cut him this season before the Knicks picked him up.

Bryant got a good look at Linsanity when the Knicks beat the Lakers 92-85 on Feb. 10. Lin outscored Bryant 38-34, just a night after Bryant said he wasn't familiar with the former Harvard guard's game.

It may be OK for a player to be unaware. Bryant wouldn't stand for it from his talent evaluators.

"The biggest thing to me is how everybody missed that," Bryant said. "They all would be fired if I was owning a team. I hear this stuff about it came out of nowhere, and I think it's [wrong].

"You can't play that well and just come out of nowhere. There has to something there and everybody missed it, so heads would roll."