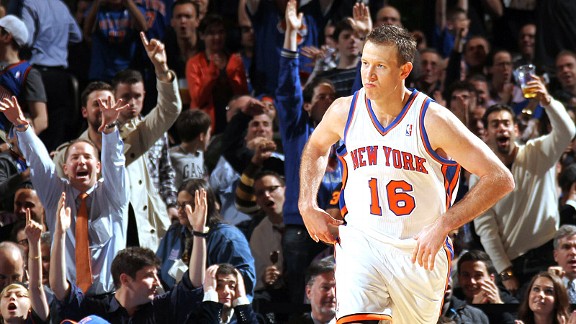 Steve Novak is averaging 12.2 points and shooting 49 percent from 3-point range since Feb. 6.Ever since he was a toddler, Knicks forward Steve Novak -- who returned home to Milwaukee on Friday night to face the Bucks -- was always shooting a basketball.

At home, Novak's parents, Michael and Jeanne, placed a mini basketball hoop above his baby crib and Steve started throwing the ball toward it in his first year. (That same hoop, by the way, is now on the crib of Steve's 19-month-old son, Mack.)

When Steve was in grade school, he took things to a whole other level. In the basement of the Novak residence, which consisted of a play area and TV setup, Steve's parents installed an adjustable hoop on two suspension poles. Even during Packers games -- the Novaks are big fans -- Steve's parents could hear him downstairs taking shot after shot.

"He would count how many shots he made, not how many he shot," Michael told ESPNNewYork.com. "One day, we heard the hoop going all afternoon and then all of a sudden it stopped. We went down there to see why the noise wasn't going on anymore, and we looked at the chalkboard and he had met his goal and had fell asleep on the couch watching the rest of the Packers game." 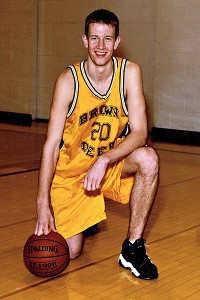 Even when Steve grew to 6-8 as a high school freshman, and with Michael -- his basketball coach at Brown Deer (Wis.) High School for four years -- encouraging him to play the post more, Steve stuck to the 3-point line.

"In his grade school years, he always had a different idea than I did in that respect early on," Michael said. "He liked that 3-point line. He kind of grew into it. I was kind of old school at first with that, thinking that the game was to be played more on the inside than had it been in the past. He soon adapted my thinking to the 3-point line for sure."

Around that time, Michael implemented a shooting device that attached to the bottom of the backboard and automatically passed balls to where Steve was standing, or a spot he would be moving to (like a tennis machine). Michael said Steve's work ethic was "impeccable" and that there was "nothing ever" to change about Steve's shot.

Michael also helped Steve capitalize on his gift in game situations. To throw defenses off, Michael ran a flex offense to enable Steve to get open looks from different areas on the court -- not just spotting up from outside. Sometimes, Michael would start Steve in the post and have him pop out to the perimeter. Player movement was key so Steve's shooting spots weren't predictable.

Steve became one of the best players in Wisconsin while playing at Brown Deer, about 12 miles northwest of Milwaukee. In his four years at Brown Deer -- where Steve moved when he was about 10 years old -- he averaged 18.7 points per game while shooting 185-for-462 from downtown (40 percent) and 411-for-462 from the foul line (89 percent).

From his junior to senior year, when he led Brown Deer to its best record (21-5) and finish (the state final four), he made 76 free throws in a row while averaging 20.6 points, 10.4 rebounds and 5.0 assists per game. (His younger brother, Chris, was a freshman starter on that team.) Before Steve graduated, he was named the 2002 Gatorade Wisconsin High School Boys' Basketball Player of the Year.

Michael said Steve's standout performance came at the start of his senior year during a regular-season game, when he scored 42 points against Dominican High School of Whitefish Bay, Wis.

"We played them at our place and they had a player named Ray Nixon, who had committed to Wisconsin," Michael said. "Steve was going to Marquette. We knew that at that point in time because they had committed to those schools during the summer months.

"It was a big game in so many ways. It was the first and only time we've ever had a sold-out game at our gym. It got crazy where people were scalping tickets out in the parking lot. It was one of the games that was very hotly contested and it was a crazy atmosphere that we weren't quite used to. We didn't win the game because they were a very good team, but Steve put up 42 points, shooting some unusual, very deep shots." 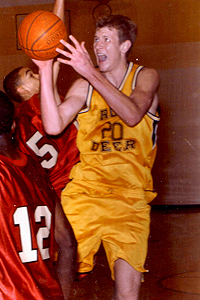 Steve averaged 18.7 points per game in high school, before staying in state at Marquette.

The Marquette coach at the time, Tom Crean, who's now at Indiana, started following Steve late in the spring of his freshman year. He was most impressed with -- what else? -- his ability to release the ball from distance.

"It was very impressive to see a young man with that size to have that kind of shooting stroke," Crean told ESPNNewYork.com. "From that point on, he became a priority recruit."

Novak eventually committed to Marquette, which is located in Milwaukee.

"There were many other great programs that he looked at, and his finalists were Illinois, North Carolina and Marquette," Crean said. "For us to get him, when we weren’t even winning at a high level yet, said a lot about how much he loved his family and how much he wanted to have them be a part of his college life. It couldn't have worked out any better."

Crean said he has coached other solid shooters through the years, but has never been around one better. He said that during Marquette scrimmages, it didn't matter who was on Steve; he couldn’t be guarded. And during drills, no matter how difficult they were, he always excelled.

Regarding Steve's mechanics, Crean said he worked with him the most on a quicker release, a quicker step into his shot and being able to shoot the ball more off the dribble and off movement. Crean also said Steve's former Golden Eagles teammate, Dwyane Wade of the Miami Heat, helped him with his shooting. Crean said Wade knew he needed teammates on the court who could play at both ends and could shoot the ball at a high level, so he pushed Steve to join him in the gym to shoot late at night.

Crean said Steve's shooting ability was a clear indication that he would play in the NBA.

"I felt like Steve had an opportunity to be a pro, even back in high school because of the stroke of his shot," Crean said. "Obviously, he was going to have to get stronger, better with the ball and better defensively. He did all those things.

"Maybe as much as any scoring that he did at Marquette was the fact that he became the [school's] fifth-leading defensive rebounder his senior year. Most people would point to their most memorable moment for Steve being the 41 points and 16 rebounds in our first Big East game against UConn [on Jan. 3, 2006], when they were ranked No. 1. That is right up there, but watching what he did time and time again is what stands out to me.” 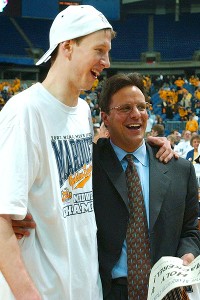 Novak, Tom Crean and Marquette reached the Final Four in 2003.

Defense is actually one of the main factors that Steve believes is the reason for his increased playing time in the NBA and recent success with the Knicks. He said his shooting got him to the league -- in fact, during his pre-draft workout with the Spurs in 2006, he made 96 out of 100 3-pointers -- and he has flourished in Mike D'Antoni's perimeter-based system. He also said he's finally matured as a defender.

"I've known coaches at Phoenix who said if I could be in a system like this, it would be good for me," said Steve, who's second in the NBA in 3-point percentage (47.7), averaging 2.3 makes per game. "Watching obviously Steve Nash make everybody look good and D'Antoni's system is open and he likes shooters, I've always known that would be fun to play in. And I hoped I would be good in it.

"I was lucky when Glen [Grunwald] called and offered me a contract this year. I was like, 'Wow, it's really going to happen.' Obviously me being in my sixth year, too, I think the stars aligned a little bit in the fact that I'm more mature. Defensively, I didn't understand things quite enough. Now, I'm at a point where if I miss a few shots, hopefully I'll still be valuable enough defensively to stay on the floor."

Not only has Steve become a fan favorite in New York, the global interest in Jeremy Lin has elevated Novak's profile around the world. Michael Novak's brother, who lives in Milwaukee but travels sometimes to Singapore for work, has seen Steve's name in the newspapers there.

Of course, Steve has been a big hit back in Brown Deer, where the Novak family watches all of his games on national TV or NBA League Pass.

"Even just walking around the school, I’ve got kids who'll say, 'Hey Novak,' and then they'll do the championship belt thing," said Michael, referring to Steve's "title belt" celebration, which has become more famously known as the "Discount Double-Check" due to Packers quarterback Aaron Rodgers' series of State Farm commercials.

So are there more No. 16 jerseys appearing on campus yet?

If Novakaine keeps injecting 3-pointers into the heart of defenders, it's only a matter of time.