NEW YORK -- For 3½ quarters on Sunday afternoon against the Heat, the Knicks were right in the game against the East's second seed.

With 6:35 remaining in the fourth quarter, the score was tied at 79-79. But then the Knicks' offense, which had been basically run through Carmelo Anthony (42 points), had a major malfunction. They couldn't put up points to balance that with their new-look defense, holding opponents to 88.8 points per game since March 14 -- the second-best mark in the league during that span.

The main reason the offense fluttered in the most critical minutes of the game was because of a lack of pace, which Anthony, Mike Woodson, Tyson Chandler, Baron Davis and Iman Shumpert all pointed out postgame. It was the first thing that Woodson addressed during his news conference, and he put the blame on himself. 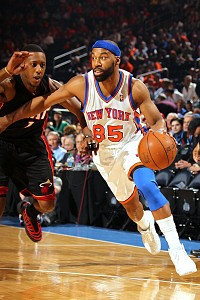 Pick up the pace? Baron Davis says he is willing.

"I thought our pace was so slow," he said. "I mean, we've got to get the ball up the floor a lot quicker and get into our offense. We missed a lot of good shots. I thought the one stretch that we got to the penalty in the third quarter, we didn’t utilize the free throw line and kind of lived on jump shots. That's on me. I've got to get guys to understand time, score, situations. I didn't do a good job with that tonight."

A lot of the onus falls on Baron Davis, but he's still not 100 percent healthy. Previously, with Jeremy Lin in the lineup, the Knicks were able to fill the wings and run with him. While Davis has some explosive spurts during games, they're not consistent enough to put pressure on the defense and force teams to adjust on the fly.

When the rhythm is too much of the same, the defense has an advantage setting a tempo, which the Heat were able to do on Sunday. Looking ahead, Davis said that's something he needs to change.

"We just have to play at a better pace offensively," he said. "Melo is great for us in the halfcourt offense. I think for the rest of us, we have to play in a better pace. That falls on my shoulders, which I don't have a problem with, being able to push the ball up and get guys easy shots."

With that lacking, the Knicks have become more a grind-it-out, halfcourt team, and occasionally they suffer to get penetration in the lane. That happened in the final period, when the Knicks played too much beyond the arc, resorting to 3-pointers. In the last 7:31 of the game, they were 1-for-5 from downtown.

"We settled a little bit for jump shots down the stretch, and they made the shots they needed to make," Shumpert said. "It was really frustrating, but we'll regroup and get ready for Tuesday [against the Celtics]. It's obvious that we can beat [the Heat], we just have to do so. If it takes us facing them in the playoffs, then that's what it takes."

Another reason the Knicks had only one field goal from 5:45 to 2:03 to play in the fourth quarter (a Chandler slam dunk) was because they got stagnant watching Anthony too much.

The man everyone was talking about after the game, Anthony, wants to see his teammates help him establish a better flow in the offense, where it's not just him all the time. He said that especially needs to be there when he's on the bench.

"Tonight, there were times where we didn't have any flow on the offensive end. Even when I was out of the game, we didn't have any flow. Guys was just trying to find where they were going to get the ball, where they were going to shoot the ball from. This is the first time in a long time that I've seen that in our offense. But it's just one game. On to the next. We've got Boston in here Tuesday. That's our focus right now."