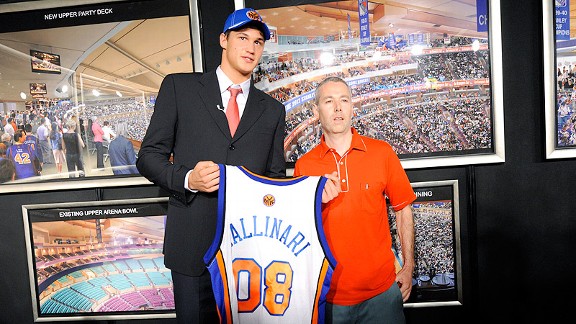 The late Adam Yauch -- aka MCA of the Beastie Boys -- was a lifelong Knicks fan. Here he poses with Danilo Gallinari at the 2008 NBA draft at Madison Square Garden.

While you’re at the job working nine to five

The Beastie Boys at the Garden, cold kickin' it live

-- "No Sleep Till Brooklyn"

Few teams commanded the attention of The Garden crowd more than the Beastie Boys. But one of the key stars from the legendary New York trio is gone.

Adam Yauch died Friday after a long bout with cancer. He was 47.

The Beasties are inexorably linked with the city and its teams, especially those of the '80s and '90s. Coincidentally, the seminal rap album Licensed to Ill was released in 1986 -- the same year the bad-boy Mets shocked the Red Sox and the sports world. The album and the team remain two of the most important icons of '80s pop culture in the Big Apple.

In 1994, at the height of Knicks and Rangers glory, the Beasties debuted at No. 1 on the charts with Ill Communication. For many, the brilliant tracks on that album are the perfect mix tape for those halcyon spring days of sports. A line from the track "Get it Together" said it all: "I got heart like John Starks, hitting mad sparks, pass me the mic, and I'll be rocking the whole park." 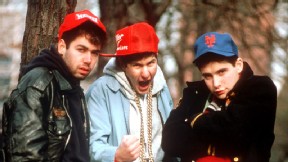 The Beastie Boys' vast canon is littered with references to New York City hoops.Yauch, known to fans as MCA, was a basketball junkie -- and the Beasties had many famous lyrics with hat tips to hoops. Ad-Rock’s line, "I'm like Clyde, and I'm rockin' steady," from Check Your Head is as close to lyrical perfection as it gets in NYC. Yauch displayed his own frustrations as a Knicks fan on 1998’s Hello Nasty: “Would someone on the Knicks please drive the lane?"

Throughout the vast catalogue of Beasties hits, there are references to Patrick Ewing, Latrell Sprewell, Anthony Mason, Harthorne Wingo and Phil Rizzuto.

The band's influence, it can be said, sometimes trumped even sports itself. In 2011, after the Knicks were blown out by the Celtics in the first round of the playoffs, the group debuted their album Hot Sauce Committee Part Two during a Livestream broadcast. The next day, a Yahoo! headline read: "Beastie Boys Outplay the Knicks at Madison Square Garden."

Yauch remained true to the Knicks to the end, attending games and the NBA draft. He directed a critically acclaimed hoops documentary in 2008 -- Gunnin' for That #1 Spot -- about the best high school players in the country playing in the Elite 24 All-Star Game.

And his hoops legacy will live on. As another hip-hop icon was planning to move his team to MCA’s native Brooklyn, Nets owner Jay-Z sampled from the Beasties with his own "Hello Brooklyn 2.0."

To honor the late MCA on Friday night, eight Mets starters took the plate to a Beastie Boys song.

MCA would have dug that -- because when it came to sports, he always seemed to be "rocking this party eight days a week."

Scott Turken is a producer with ESPN's Production Migration unit, which powers the video on ESPN's local sites. Send feedback to scott.turken@espn.com. Follow him on Twitter @Turk0219