Many Knicks fans remember Randy Foye's big fourth quarter against the Knicks on Feb. 9, 2011, scoring 17 points to lead the Clippers to the 116-108 victory. He also went off on the Knicks this year, scoring 28 points on April 25, but this time the Clippers fell short, 99-93.

Foye, a Newark native who attended East Side High, has always played well at Madison Square Garden -- even dating back to his days at Villanova when he played there during a couple of Big East tournaments. 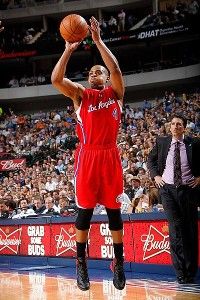 During the second half of the season, Clippers PG Randy Foye led the league in 3-pointers.

Now, heading into free agency, which starts July 1, it's the Garden that's on his favorites list, according to a source close to the six-year veteran who's been in Los Angeles the past two seasons.

Foye, an unrestricted free agent, is interested in the Knicks and their mid-level exception of $3 million, which came about based on the early Bird rights ruling.

"He will have multiple offers at that amount and more annually," the source told ESPN New York. "New York would be a great fit for both [playing and financial reasons]."

Foye's specialty on the court would boost the Knicks in one of their weakest categories during the 2011-12 campaign: 3-point shooting (33.6 percent). During the second half of the season, Foye made the most 3-pointers in the league, even outdueling Steve Novak by two (87 to 85). While Novak had the highest percentage during that span (48.0), Foye was still lights out at 41.4.

While the Knicks will likely want to use that $3 million on one of the top point guard free agents, Steve Nash, Andre Miller or Raymond Felton, any of those veterans could demand more than that per year. So that could leave Jason Kidd, who sounds like he's the most willing to accept a veteran's minimum contract and to either be a starter or backup mentor to Jeremy Lin.

Then, the Knicks could also retain Novak using his early Bird rights and re-sign J.R. Smith, who decided not to opt in, to 120 percent of his previous year's salary using a non-Bird exception (around $2.8 million). They could also use a second veteran's minimum of $1.4 million to sign Lamar Odom.

In this scenario, the Knicks will have added one seasoned player in the backcourt (Kidd), one in the frontcourt (Odom) and another 3-pointer to their arsenal: Foye, who can also create off the dribble, play some D and replace Iman Shumpert temporarily at starting shooting guard.

In addition to Foye, Ray Allen, Anthony Parker and Mickael Pietrus are other 3-point shooters who could be on the Knicks' radar.