Chris Smith, the younger brother of guard J.R. Smith, has signed with the Knicks, the team announced Wednesday.

His agent, Marc Cornstein, wouldn't disclose the terms of the agreement -- it's likely partially guaranteed -- but he called the opportunity "a dream come true for Chris."

"We are very excited about him joining the Knicks and look forward to him getting a real opportunity to contribute," Cornstein told ESPNNewYork.com. 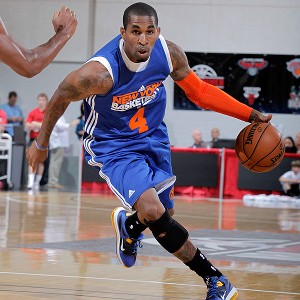 "He's now going to have to work extremely hard and establish himself as part of this veteran team."

On Wednesday, J.R. tweeted a photo of Chris signing his contract.

Chris Smith, a point guard from Louisville, played for the Knicks' summer league team in Las Vegas. He could likely be a training camp roster-filler because the team is already stacked at the point with Raymond Felton, Jason Kidd and Pablo Prigioni.

A source familiar with the situation said the Knicks acquired Smith so they could assign his rights to their D-League team, the Erie BayHawks.

"The D-League is an option, as it is for all rookies," Cornstein said.

Information from Ian Begley was used in this report.