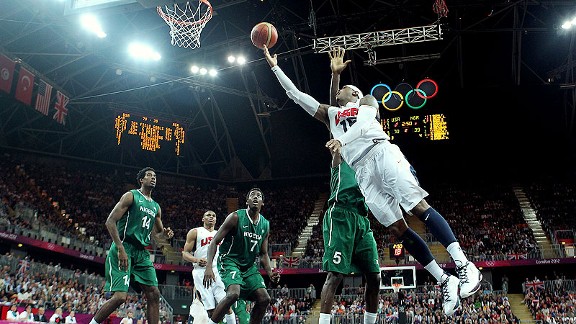 His shots aren't just going in, they're barely touching the rim.

And he only needed 14 minutes to do so.

And in a development that is sure to make some Knicks fans smile, Anthony snapped Stephon Marbury's single-game U.S. Olympic scoring mark of 31, set in the 2004 Athens games.

Marbury's wasn't the only record to fall on Thursday.

The United States' 156 points against Nigeria were an Olympic team scoring record, and its 29 3-pointers made also established a new mark.

To put the 29 3s in perspective, Nigeria finished the night with 28 total field goals.

For the second straight game, Anthony led the way for the United States' explosive offense.

In Tuesday's win over Tunisia, Anthony had 16 points on 6-for-6 shooting in 12 minutes.

At one point after knocking down a 3 in the second half, Anthony threw up his hands and shrugged his shoulders as if to say, 'I can't miss.'

It's a gesture Knicks fans would surely love to see in the Garden this winter.

EASY NIGHT FOR TYSON: With the U.S. up big early, center Tyson Chandler had a light night against Nigeria. The Knicks center had five rebounds and two points in 14 minutes.

He played with no ill effects of the minor hand ailment he suffered Tuesday against Tunisia.

PRIGIONI OUT AGAINST TUNISIA: Knicks point guard Pablo Prigioni, 35, sat out of Argentina's win over Tunisia on Thursday due to kidney stones, according to reports out of London. The New York Daily News reported that Prigioni is expected to be available for the rest of the Olympics.