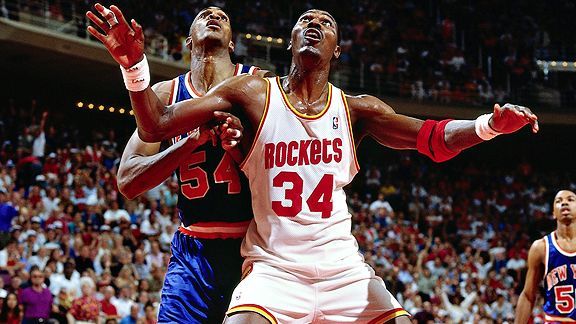 Hakeem Olajuwon is passing on his trade secrets.Amare Stoudemire entered the offseason wanting to work on his post game, and coach Mike Woodson agreed, explaining to his power forward that he wanted to use him more on the block next season.

From there, Woodson placed a phone call to one of the greatest centers in NBA history, Hakeem Olajuwon, with whom he played on the Rockets from 1988 to 1991. Olajuwon, who manages a big-man offseason camp at his home in Houston, booked Stoudemire in his training schedule, which includes only a few players each summer.

"Coach really is the one who made it happen," said Travis King, Stoudemire's longtime training adviser. "Mike Woodson himself said he wants the ball to go through Amare in the post more, taking advantage of Amare and Tyson (Chandler), and even Carmelo Anthony.

"The Knicks' frontcourt has got to be one of the most experienced and best ones in the league. The games are decided inside most of the time."

For the past five days, STAT has been in Houston, staying at a hotel and working out for about 3½ hours per day at Olajuwon's indoor, full-sized basketball court, which is located on his 500-acre ranch. It's the same place where Kobe Bryant, Dwight Howard and LeBron James have trained individually from 2009 to 2011, respectively. It has been reported that Olajuwon charges $50,000 per week, but King wouldn't reveal the amount.

Stoudemire, 29, averaged 17.5 points and 7.9 rebounds and shot 48 percent from the field last season -- his lowest output since 2005-06, when he played just three games because of an injury. His scoring average dropped nearly eight points from 2010-11 to last season.

"A lot of people think that Amare is past his prime, but we really don't feel like he is," King said. "Amare is a six-time All-Star, but he's always been in pick-and-roll and pick-and-pop situations. But now he's really focused on his back-to-the-basket game. As you get older and your athleticism declines, it's good to add other things to your game to keep playing at an elite level. Look at Kobe, for example."

Along with Nuggets center JaVale McGee, Stoudemire has been learning "Dream Shake" moves and defensive skills. Woodson has even stopped by to observe.

"Amare is a real student of the game, and when he wants to get better, he does whatever it takes, whether it's been working on his free throws or his jump shot," King said. "Now, it's working on playing on the block and working on his defensive presence. Hakeem is one of the best shot-blockers to ever play the game and one of the best-scoring centers to ever play the game. He's been trying to take it all in to become a complete player."

King said that Stoudemire working with Olajuwon represents his desire to be constantly pushed in new ways.

"He's always been a fan of Hakeem; he just never had a chance to play against him," King said. "Some of the stuff that Hakeem does, like his footwork, is unconventional. Guys don't teach that stuff, but he can teach it because that's how he dominated the league for 18 years. It's not something where you can pick up a book or pick up a video, and then perfect it."

King said Stoudemire is also picking Olajuwon's business brain. That's because STAT is determined to follow in the footsteps of not only Olajuwon, but also Michael Jordan, Magic Johnson and Shaquille O'Neal, who have all earned big bucks off the court. "The Dream" earned his -- hundreds of millions, that is -- in the Houston real estate market.

Overall during the offseason, Stoudemire is not a creature of habit. With the help of King, Stoudemire arranges different training routines, and every month -- sometimes every week -- he's in another basketball facility.

"He just works out so hard, so we don't do the same thing," King said. "We switch things up for him to give him a different environment."

Already this summer, Stoudemire has trained in New York, Las Vegas, Bradenton, Fla., Paris, Spain and now he's in Houston, where Chandler may join him after the Olympics. Woodson has encouraged it. King said that he and Stoudemire were originally discussing going to the University of Kentucky during this time to train with John Calipari and Kenny Payne before the "Dream" opportunity came about.

After he finishes up with Olajuwon on Aug. 19, Stoudemire is flying to China, where he'll take part in a Nike tour. But he'll be still be working out. In fact, King said this week marks the third month in a row Stoudemire has not missed a single day of training. Stoudemire travels everywhere with three trainers -- his main one, a strength and conditioning specialist and physical therapist -- and makes sure to get in two-a-day workouts. King said Stoudemire's back is "doing great and has no issues."

"I think New York's going to be really pleased when he comes to training camp," he said. "He's always been in great shape, he's always taken care of his body, but he's really been on a strict diet and doing two-a-days. He's not taken any days off. He's really committed to being the best power forward in the game."

Stoudemire will be traveling back to New York in early September, where he'll start participating in pickup games and getting acclimated to his new teammates, before real training camp begins later in the month.