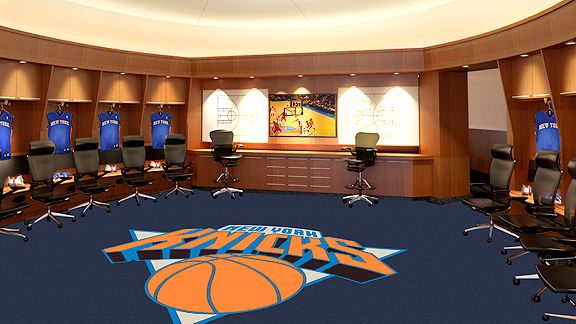 The new Knicks locker room will be ready when Phase 1 of MSG's transformation is completed by opening night.

Up until recently, you could argue that the hottest "housing" market in New York City was located on Seventh Avenue between 31st and 33rd Streets in New York City. But not anymore.

That's because Madison Square Garden's new 20 event-level suites, which will be unveiled officially at the end of October when the arena reopens after massive renovations, are already sold out. As part of the upgraded lower-bowl concourse, the suites are actually right on top of the ice (for Rangers games) and eight rows back from the court (for Knicks games) -- a world away from being located above the 400 level. Hank Ratner, President and Chief Executive Officer of MSG, couldn't disclose the tenant names or price points except to say, "It's the who's who of corporate America."

This morning, Ratner, along with Joel Fisher, Executive Vice President of MSG Sports Bookings and Arena Transformation, and Barry Watkins, Executive Vice President of Communications, guided a private tour for approximately 20 members of the media to view the MSG Transformation Center and inside the arena. We started at the center, which includes an exact replica of one of the suites. They're about 700 square feet and offer what you would normally find in a spacious studio apartment in NYC: a large flat-screen TV, a couch, chairs, a dining table and kitchen. But the most surreal amenity about them is that their stairs lead right into rows of seats that are up-close to the action. It's something that you would never see in any other current sports arena. 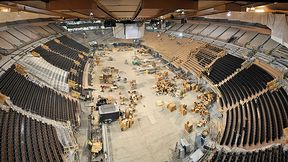 A photo from inside of the arena taken today.

Afterward, we dressed in construction gear -- hard hat, glasses and a yellow MSG vest -- and we were led to the ground floor of the arena and then through different backstage areas, including the Knicks and Rangers locker rooms and the new Delta Sky360 Club (more on these below). Along the way, taking in the scene through observations and conversations, here are 10 things that jumped out at me: