Dirk Nowitzki on Kristaps Porzingis: 'He's going to be a great player'
6yIan Begley
NBA stats-based win projections: Why one model has the Warriors fighting for a playoff spot
7dKevin Pelton
Ranking the teams that control the future of the NBA draft
29dBobby Marks
Donovan Mitchell to the -- checks notes -- Cavs? Grading the blockbuster deal between Cleveland and Utah
34dKevin Pelton
Nov 15, 2016

Kristaps Porzingis paid a tribute of sorts to Dirk Nowitzki in the fourth quarter of the New York Knicks’ win over the Dallas Mavericks on Monday.

He also made sure that Nowitzki was watching.

“He was staring me down. That was cold-blooded,” said Nowitzki, who was watching the game from the bench due to an Achilles injury.

Porzingis mentions Nowitzki as a player who inspired him when he was younger in Latvia.

So he'd appreciate the praise Nowitzki heaped on him Monday night.

“He’s not only a 7-footer but he is like 7-4 out there with an 8-5 wingspan,” Nowitzki said. “He’s got an incredible touch. He can move. He can dribble. He can put it on the floor more now. He is going to be a great player in this league for a long, long time.”

Nowitzki said that after watching Porzingis score 24 points and grab 11 rebounds in the Knicks’ win. He may see more of Porzingis this summer.

Knicks coach Jeff Hornacek tried to arrange a workout with Nowitzki and Porzingis before the season, but it didn’t come together due to scheduling conflicts. The players hope to work out together in the coming offseason.

“I am a huge fan of his game. Obviously the sky is the limit for him,” Nowitzki said. “He's got the deep ball. He’s got the in-between game. He is working on his post-ups. He is the real deal.”

No change to starting five -- yet: After a sluggish first half for the Knicks on both sides of the ball, Hornacek changed his lineup in the second half, going with Justin Holiday over Joakim Noah to start the third quarter. The lineup of Holiday, Derrick Rose, Courtney Lee, Carmelo Anthony and Porzingis went on a 19-6 run to start the quarter, which allowed the Knicks to take control.

Hornacek chose to go with Holiday over Noah to improve the spacing on offense by forcing Mavs center Andrew Bogut to guard Porzingis on the perimeter. After the game, Hornacek said he’d consider using the lineup more often, but he isn’t considering a permanent change to the starting lineup.

“Jo does a nice job in there defensively,” Hornacek said. “It may depend on the team. Maybe we can go there a little bit more often. But we’re not -- just because we were good in the second half doesn’t mean we’re going to change [the starting lineup].” 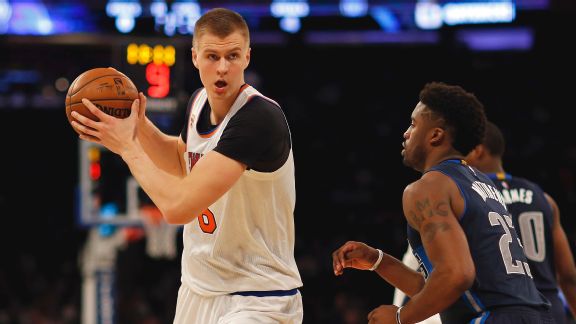 Dirk Nowitzki says there's a lot to like about Kristaps Porzingis' game.

• Mirror ball: Porzingis praised by Dirk
• Just a touch of Vinsanity does the trick
• Capela impresses in big-man battle
• Draymond: I'm one of NBA's best
• Tim Frazier rising from obscurity
• How Bill Walton got his bike back

“Coach made the decision and it worked tonight. It’s hard to win in this league and it’s a team game,” Noah said. “I’m happy we got the W.”

Noah is averaging 4.8 points per game in 24 minutes and teams have sagged off of him on defense, keeping an extra player in the paint. Noah acknowledged after the game that he needs to “figure out ways to be more effective on that end of the floor.”

Phil picks up tab during dinners with Carmelo: In addition to talking about the Knicks, Lakers and taking a shot at LeBron James, Phil Jackson talked about his relationship with Carmelo Anthony in a Q&A with ESPN senior writer Jackie MacMullan. He said that Anthony seeks communication from Jackson and that the two have gone out to dinner together to talk shop.

“We’ve had our moments. We’ve had our quote, un-quote dinner dates. I’m cool with going out with him and having dinner with him and talking to him. I don’t have a problem with that,” he said. “I think I’m pretty good at reading people, but communication for me is key whether with Phil, whether with my wife, with my son, regardless of who it is. I like to talk, I like to communicate with you. I don’t know what you’re thinking. You could try to figure out what I’m thinking, good luck with that. I think it’s much better for everybody when we can communicate and that line of communication is open.”

As for who picks up the tab, Anthony jokingly said, “Oh, for sure, Phil. I’m not paying for no dinners with Phil.”