NEW YORK -- There’s a loud contingent of fans, media, and even some opposing front office members, who think the New York Knicks would be best served running their offense primarily through Kristaps Porzingis and asking Carmelo Anthony to take a secondary role.

Nights like Friday, though, poke holes in that theory.

Yes, Porzingis is the future. No one questions that. But the present-day Knicks will need Anthony healthy, productive and playing a prominent role to reach their potential.

The 32-year-old willed New York to a 113-111 overtime victory against the Charlotte Hornets on Friday with 35 points, 14 rebounds and five assists.

Roll back the clock. https://t.co/w17BkhN0oL

Anthony said afterward that he would have passed up the chance to take the game winner if he had an open teammate, and he provided evidence earlier in the game to support that stance. The 13-year veteran had two key assists to Willy Hernangomez in the final three minutes of the fourth quarter and another assist to Porzingis that led to a 3-pointer in the Knicks’ second-to-last possession of overtime.

But Anthony also wanted another chance to seal the game after missing a shot at the end of regulation.

“I wanted that shot. I wanted that moment, to be honest with you,” he said. “I felt like I had an opportunity to close it in regulation and in overtime I did want that situation.”

He got it, and the Madison Square Garden crowd reacted with an ovation that has been reserved, lately, for Porzingis highlights.

It wasn’t long ago -- four days ago, actually -- that some in the Garden crowd openly groaned when Anthony had the ball in his hands late in a close game.

Porzingis, in the midst of another brilliant night, wasn’t getting many touches in the final minutes against the Portland Trail Blazers. And there was unmistakable grumbling from the home crowd. The message that night was clear: Get the ball to Porzingis.

The Porzingis-Anthony debate will continue on television and sports-talk radio over the course of the season. But listening to Porzingis himself, it seems there’s little doubt about the important role Anthony plays in his success, and that of the Knicks.

“I’m happy to have him and [Derrick Rose] and guys who are really aggressive driving to the basket, who draw so much attention for me to be able to get those wide-open looks and then attack. It’s good sometimes that we have that. Without them, it would be much more difficult.”

There are some numbers that support this theory as well: Through 15 games, Porzingis is shooting 4.5 percent higher when he shares the court with Anthony. His 3-point splits are dramatic.

In general, the balance between Anthony, Porzingis and Rose has worked well in the past three games. The Knicks have beaten three teams (Portland, Atlanta, Charlotte) that entered the week with a combined record of 23-10. And Rose, Anthony and Porzingis have all played prominent roles.

Kristaps will not allow that https://t.co/BCthqCkaIo

As does Rose' game-winner against Portland:

Credit Jeff Hornacek there. The Knicks' coach has found a balance with his scorers and some substitution patterns he likes, such as starting Porzingis with the second unit in the second quarter and resting Anthony early in the fourth quarter. Hornacek faces a challenge in inserting Joakim Noah back into the rotation while maintaining minutes for Hernangomez and Kyle O'Quinn, and the coach will face another challenge when reserve forward Lance Thomas is ready to return from ankle and foot injuries. 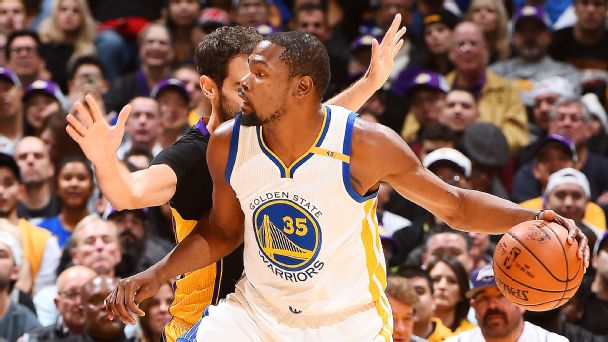 Draymond Green exited with an ankle injury as Kevin Durant and the Warriors rolled past the Lakers for a 10th straight victory.

• Durant does it all vs. Lakers
• Bulls finish off 'circus trip' in style
• Cavs set record with 20 more 3s
• Melo on winner: 'I wanted that moment'
• Veteran Spurs teach young C's

But Hornacek has handled the Anthony-Porzingis dynamic well. And one of his most effective moves Friday was to put the ball in Anthony’s hands.

“You can run all of the plays you want ... but Melo has the experience,” Hornacek said. “He makes big shots; that’s a luxury to have.”

It’s a luxury the Knicks should continue to put to use.