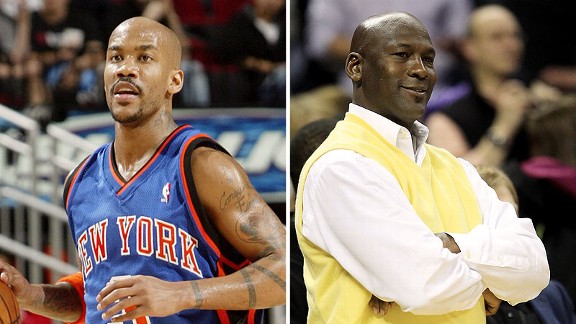 Jordan, owner of the Charlotte Bobcats, has been chastised by some NBA players and media pundits for his hard-line stance during the NBA lockout.

• "Micheal Fake Jordan is a sell out. #Period. He forgot which hole he came out of. I said it 'Stephon X Marbury.'"

• "MJ went from MJ the black cat to a guy who forgot he was a player. Sell your team if you can't make a profit.. Your just a regular dude now!"

Jordan, who won six titles as a player with the Chicago Bulls, is reportedly a driving force behind a faction of owners who want the players' percentage of basketball-related income set no higher than 47 percent.

Marbury continued his critique of Jordan over a series of replies to his followers on Wednesday and Thursday:

• "He's just a man. I know he's some people's GOd but real is real. Dude forgot he played and demanded millions."

• "He never did nothing that I knew about to change the life off of the court other then hit cats over the head for a 100 150 dollar sneakers and still doing it."

• "Jim Brown said it best. Mikey mouse type cat. Wave and take your bread. He doesn't care about the hood or what's good in the hood."

• "when he rapped the BULLS for 36 million for one year no ones said nothing about that. We said he's Mike he should. Now look!"

Marbury also retweeted this: "He made an empire off of our people, and never gave back. No matter how many kids were getting killed over his bumass kicks."

Jordan's motives have also been questioned by current players, such as Warriors rookie Klay Thompson.

In a conversation with Indiana's Paul George on Twitter, Thompson tweeted, "man straight hypocrite bro.. He should've been the 1st one behind us."

Marbury, 34, currently plays in China. He last played in the NBA in 2009, suiting up in 24 games for the Boston Celtics.

He spent a mostly disastrous 4½-season tenure with the Knicks. New York's highest win total with Marbury was 39. They made the playoffs once -- in Marbury's first season -- and were swept by Jason Kidd and the Nets.

Among other embarrassing off-court incidents, Marbury briefly went AWOL from the team in Isiah Thomas' last season as coach, and made headlines with his testimony in a $10 million sex-harassment lawsuit against Thomas and Madison Square Garden.