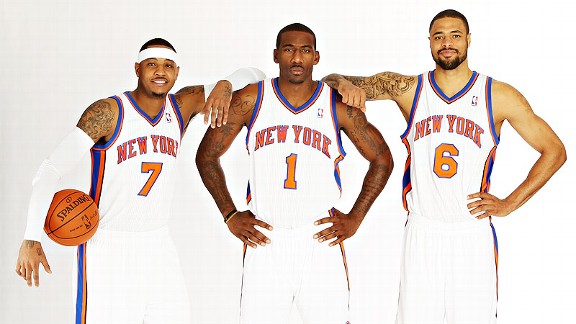 In the NBA, "The Big Three" is simply played out.

In recent years, it was the Celtics' Ray Allen, Paul Pierce and Kevin Garnett. Then it was the Heat's Dwyane Wade, LeBron James and Chris Bosh.

Now that Carmelo Anthony, Amare Stoudemire and Tyson Chandler have formed arguably the league's best frontcourt, we need a nickname for them.

For starters, "The Bigger Three" could work because the trios mentioned above feature the 2 through 4 positions, not 3 through 5 like the Knicks.

Here are four other candidates:

What's your favorite? Got your own? Leave your submissions below. We will be posting the best ones Wednesday morning.