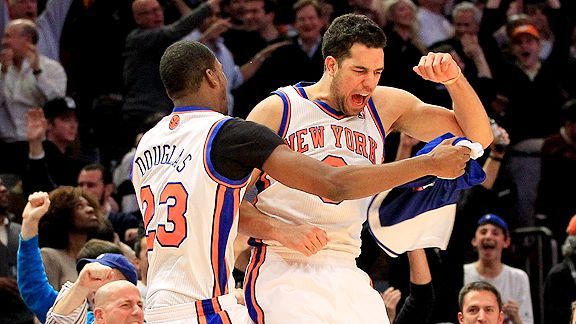 Will Toney Douglas and Landry Fields give the Knicks reason to celebrate?Continuing through Dec. 23, ESPNNewYork.com will run a series called "Christmas Countdown" examining a hot topic each day that involves "your New ... York ... Knicks!" as PA announcer Mike Walczewski says with slight pauses and strong punctuation.

Every team entering a new season usually has, from common circumstances, at least three starters whose names are written in pen.

For the Knicks, their three is obvious: "The MTA" featuring Carmelo Anthony, Amare Stoudemire and Tyson Chandler.

The two penciled in are point guard Toney Douglas and shooting guard Landry Fields, the Knicks' current backcourt. That's because two main things can change in the next month or so: All-Star Baron Davis, who could sign on Monday, gets healthy and starts at the one; and two, Iman Shumpert continues to impress and gets the nod.

Looking ahead, Douglas is in a rockier situation. Not only is Davis, 32, a potential threat, but current backup point guard Mike Bibby could be called up to provide veteran assistance to help Anthony, Stoudemire and Chandler jell. That's why Bibby replaced Mario Chalmers in the starting lineup in Miami toward the end of last season. True, Bibby went on to play subpar, but he had to adjust on the fly to a team that was just two weeks away from making a deep playoff push.

But don't knock Douglas and Fields too much, because now they are the Knicks' best starting backcourt -- and could be for a while.

The pluses for Douglas are that he complements Mike D'Antoni's system in two ways: one, he's fast and likes to push the ball; and two, he can shoot it from three. Since losing long-range marksmen Wilson Chandler and Danilo Gallinari in the trade for Anthony, as well as floor general Chauncey Billups to the amnesty clause, the Knicks needed to fill their roles. Douglas was the immediate answer. For him to be the long-term answer, he'll have to master the pick-and-roll, the staple in D'Antoni's offense, and read defenses more quickly in the seven-seconds-or-less, quick-passing system.

The biggest plus regarding Fields is that he can score without demanding the ball. The Knicks don't need another player in the first unit with a first-thought-scoring mentality; they already have that with Anthony and Stoudemire. What they need is a shooting guard who will play hard-nosed defense -- the Knicks' focused priority since landing Chandler -- put the ball in basket with intangible playmaking and, most importantly, connect on the open 3-pointer. With Anthony, Stoudemire and Chandler on the court at the same time, condensing the defense, Fields should have three to five wide-open opportunities beyond the arc every game. If he can't capitalize on them, that's where Shumpert and Bill Walker, once he's finally recovered from a strained left groin, could step in.

Overall, the Knicks have an average backcourt compared to the other teams in the Eastern Conference. What matters more, though, is that there are three teams legitimately better than the Knicks at the 1s and 2s: the Heat (Mario Chalmers and Dwyane Wade), Bulls (Derrick Rose and Keith Bogans) and the Celtics (Rajon Rondo and Ray Allen).

While Douglas and Fields got schooled -- or should I say swept? -- by Boston's guards in the first round of the 2011 playoffs, the two running mates went into the offseason prepared to not let that happen again. They examined the reads they missed guarding Rondo and Allen, and they both trained hard and bulked up to manage the shortened season and make sure they weren't going to get bullied again in a playoff series.

While Saturday afternoon at the Prudential Center didn't offer anything close to a postseason game, Douglas and Fields' performance, combining for only 12 points, was something to write about. The headline: What happened? Afterward, D'Antoni said they didn't have the usual "pop" in their game, and he mentioned that Douglas "cramped up" in the second half.

Speaking of which, the only other way to break down the Knicks' backcourt is if they literally break down -- physically, that is -- anytime in the span of 66 games, which includes back-to-back-to-backs and other too-close encounters. So, in a nutshell ... Hey, Toney and Landry, watch out for Davis and Shumpert -- and the cramped schedule.