Bobby Cox's Mets legacy
11yMark Simon
A fans guide to abiding the LOL Mets
12dDevin Gordon
Jeff Passan answers 20 burning questions about the MLB playoffs
12dJeff Passan
What's next for the New York Mets after Luis Rojas' departure
14dBradford Doolittle and David Schoenfield
Mets move on from Rojas after 3rd-place finish
14d
Mets likely to make Rojas decision before others
18d
MLB Power Rankings: Where all 30 teams stand in the final week
18dESPN.com
Mets give Syndergaard start, shut deGrom down
20d
Your squad isn't going to the MLB playoffs? The No. 1 offseason question for each eliminated team
14dBradford Doolittle
Passan's early MLB free-agency tiers: Which stars are going to get paid this winter?
19dJeff Passan
MLB Power Rankings: Where all 30 teams stand as playoff picture comes into focus
25dESPN.com
Prospects who have taken the biggest step forward in 2021 for all 30 MLB teams
27dKiley McDaniel
Sep 17, 2010 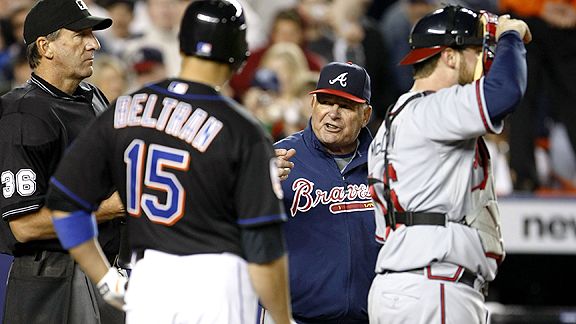 Bobby Cox has contested many a call in his day, but no one can argue with his success against the Mets.

There were two things that happened in Bobby Cox's first game managing against the Mets on May 1, 1978, that would serve as foreshadowing of things to come.

For one, Cox, frustrated with a few calls from the umpires 21 games into his managerial career, got ejected from a game for the first time, in the fifth inning.

Most Career Wins vs Mets (Managers)

For another, the Braves rallied from a 5-2 deficit for a 6-5 victory over the Mets before a crowd of slightly more than 5,000 fans at Fulton County Stadium.

Cox, the all-time leader in documented ejections and among the winningest managers in baseball history, returns to Citi Field this weekend for his final three games managing against the Mets, who get a chance to play spoiler for Cox's teams postseason hopes.

If they succeed, it would be one of the few times they've had the last laugh on Cox, who will retire with more regular season wins and more games managed against the Mets than anyone else.

Cox won't have the best win rate against the Mets. The Elias Sports Bureau says that honor belongs to Sparky Anderson (72-36, .667 win pct), but it sure feels like it belongs to Cox.

Long forgotten is Cox's 18-32 record in his first 50 decisions against the Mets, which encompass the mediocre Braves teams from 1978 to 1981, and 1990, the year before Atlanta became a baseball juggernaut.

Since 1991, Cox's Braves have beaten the Mets 59 percent of the time (the Mets have done worse against the Braves than any NL team in that time). They've won the season series from the Mets in 15 of the last 19 years and can make it 16 out of 20 if they win two of three this weekend. At least the Mets have a shot in their home ballpark-- in Atlanta over the last 20 years, they're 52-98.

Cox's presence has been a source of bad memories all over the place -- the three straight losses in Atlanta to end the 1998 season that knocked the Mets out of postseason contention, the six-game Braves victory over the Mets in the 1999 NLCS and the crushing late-inning losses to the Braves in 2001 when the Mets made a late-season charge to the division title.

There have been a few good ones for the Mets against Cox, mostly from the days when Bobby Valentine (who had the game-winning RBI the first time the Mets beat Cox in 1978) managed-- a comeback from 6-0 down in Atlanta to win on an Alex Ochoa home run in 1997, Robin Ventura's "Grand Slam Single" in the 1999 NLCS, the 10-run eighth-inning rally capped by Mike Piazza's game-winning home run in 2000, the September 21, 2001 victory that marked the first game back in New York after the September 11 terrorist attack, and Willie Randolph's first managerial win in 2005.

But for the most part, it's been an experience that was a lot like the one Mets fans had from that first game Cox managed against the Mets. Empty and frustrating.