Dickey Mets biggest STAR in 2010
11yMark Simon
Carrasco has bone fragment removed from elbow
7d
A fans guide to abiding the LOL Mets
21dDevin Gordon
Jeff Passan answers 20 burning questions about the MLB playoffs
21dJeff Passan
What's next for the New York Mets after Luis Rojas' departure
22dBradford Doolittle and David Schoenfield
Mets move on from Rojas after 3rd-place finish
23d
Mets likely to make Rojas decision before others
27d
MLB Power Rankings: Where all 30 teams stand in the final week
27dESPN.com
Mets give Syndergaard start, shut deGrom down
29d
Your squad isn't going to the MLB playoffs? The No. 1 offseason question for each eliminated team
23dBradford Doolittle
Passan's early MLB free-agency tiers: Which stars are going to get paid this winter?
28dJeff Passan
MLB Power Rankings: Where all 30 teams stand as playoff picture comes into focus
34dESPN.com
Prospects who have taken the biggest step forward in 2021 for all 30 MLB teams
36dKiley McDaniel
Sep 24, 2010 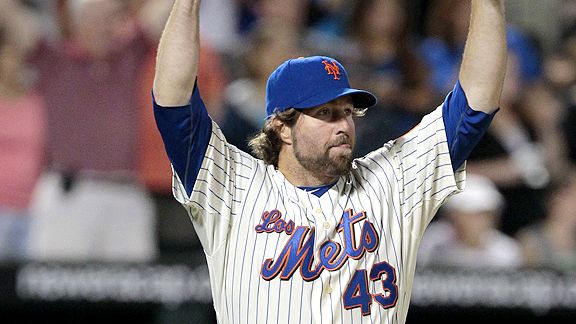 I’m making my pick for 2010 Mets MVP today because what happens the rest of the season doesn’t have any impact on my choice.

I know that the stats will tell you that Angel Pagan, David Wright, Ike Davis, Jose Reyes, Johan Santana, and Mike Pelfrey all had higher WAR ratings (Wins Above Replacement, a stat that measures total value for those unfaimilar), but I’m tossing that stat aside for now.

Let’s start with his statistical value. Dickey currently rates ninth-best in the National League with his 2.92 ERA, and rates fifth in the league in walks per nine innings (2.2).

This after willingly starting the season in the minors, where he was as good with Triple-A Buffalo, if not better, than he’s been here.

Dickey has also established himself as the Mets best hitter among their pitchers, and he’s actually been a valuable lineup asset. He’s hitting .229 with five RBI, seven runs scored, and seven sacrifices.

That includes a stellar 5-for-15 with runners in scoring position, which could end up rating as among the best performances by a Mets pitcher in a single season in their history.

Dickey has also been fantastic at putting the ball in play, striking out only eight times in 57 plate appearances. His approach is very measured, and he’s had several at-bats in which he’s guided the ball successfully to right field. Not bad for someone who entered the season with five career at-bats.

But in order to articulate Dickey’s true value to the Mets, I’m going to invent my own statistic. My colleagues in research have had some fun recently, using the WAR metric in various ways. Our favorites include GARP (Glisten Above Replacement Pizza) and PAR (Parm above Replacement) to evaluate meal choices. Using that as inspiration, I’m calling my metric STAR (Story Above Replacement)

In a season in which the news has gotten progressively worse on a daily basis (not anywhere near the extent of 2009, but the equivalent of an unfriendly cousin), Dickey has been the best story on the team. STAR gives him points for, among other things:

Starting the season in the minor leagues, with no complaints

Having his first legitimately effective season at age 35

Not wanting to come out of games despite potential injury

Being among the most articulate and interesting players in baseball

Given the options to read about player moping, bad manners, injuries, potentially criminal behavior, and endless managerial and front office speculation (all of which we’re familiar with), Dickey has been the most pleasant story of 2010.

The reward for that should be an MVP billing, a nice contract for 2011, and a promise that he’ll get the first turn to make the following season a positive experience.