Re-signing Yoenis Cespedes a move the Mets had to make
5yAdam Rubin
Carrasco has bone fragment removed from elbow
5d
A fans guide to abiding the LOL Mets
20dDevin Gordon
Jeff Passan answers 20 burning questions about the MLB playoffs
20dJeff Passan
What's next for the New York Mets after Luis Rojas' departure
21dBradford Doolittle and David Schoenfield
Mets move on from Rojas after 3rd-place finish
21d
Mets likely to make Rojas decision before others
26d
MLB Power Rankings: Where all 30 teams stand in the final week
26dESPN.com
Mets give Syndergaard start, shut deGrom down
27d
Your squad isn't going to the MLB playoffs? The No. 1 offseason question for each eliminated team
22dBradford Doolittle
Passan's early MLB free-agency tiers: Which stars are going to get paid this winter?
27dJeff Passan
MLB Power Rankings: Where all 30 teams stand as playoff picture comes into focus
33dESPN.com
Prospects who have taken the biggest step forward in 2021 for all 30 MLB teams
35dKiley McDaniel
Nov 29, 2016

NEW YORK -- Make it two years in a row that the New York Mets have re-signed their slugger -- with favorable terms. 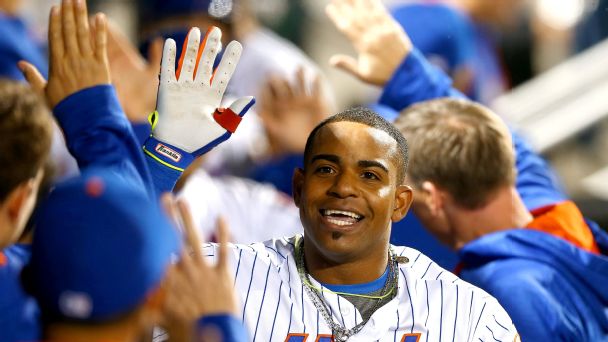 Rated by Keith Law as the top free agent this offseason, Yoenis Cespedes re-signed with the New York Mets on Nov. 29 for four years and $110 million.

• Schoenfield: Cespedes isn't a superstar, but it won't matter if Mets win

• Rubin: Re-signing Cespedes a move the Mets had to make

• Law: Cespedes deal could be great if the Mets move him from center field

Outfielder Yoenis Cespedes agreed to a four-year, $110 million contract with the Mets on Tuesday that should be finalized within days. That makes it two straight offseasons that Mets officials initially expressed pessimism about re-signing Cespedes, then ultimately brought him back without an ultra-long commitment.

Make no mistake: The Mets had to bring Cespedes back in order to remain competitive with the Washington Nationals in the National League East -- and not just because the Nats were one of Cespedes' other reported suitors.

Yes, the Mets have a vaunted pitching staff, at least when healthy. But it was not until Cespedes arrived with the Mets at the non-waiver trade deadline in 2015 that the team truly ascended.

In 2015, the Mets became the first team in major league history to reach the World Series after ranking last in MLB in runs scored on July 31. And in one and a half seasons with the Mets, they now own a 106-74 record with Cespedes in the starting lineup and an 18-23 record without him.

Sure, the Mets could have trotted out an all-lefty-hitting primary outfield of Jay Bruce, Curtis Granderson and Michael Conforto next season had Cespedes departed. But the offense, even with Neil Walker also having accepted a qualifying offer and returned, would not have been the same caliber.

This was not a one-sided deal. The $27.5 million per year average is the highest for an outfielder in MLB history. And a full no-trade clause means Cespedes will dictate whether he goes elsewhere during the duration of the deal.

And there remains valid concern about what type of effort Cespedes will provide now with a four-year deal locked in.

Still, the Mets got Cespedes without committing to five or six years, which should be viewed as a win.