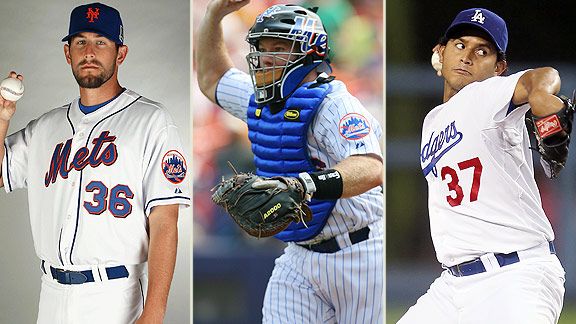 With Brad Emaus perhaps the frontrunner to emerge as second baseman, and with Terry Collins speaking positively about fellow Rule 5 pick Pedro Beato as a candidate for the bullpen, Major League Baseball provided ESPNNewYork.com with a list of the Mets' Rule 5 picks in the major league phase over the last two decades, as well as their fates.

The short version of the rule: If the Rule 5 pick sticks on the Mets' major league roster for the entire season, he becomes the organization's property. Otherwise, he must be placed on waivers. If he clears, he must be offered back to his original club -- Toronto with Emaus, Baltimore with Beato -- for $25,000. It cost the Mets $50,000 apiece to select the players in the Rule 5 draft in December.

2003 -- LHP Frank Brooks (was selected by Mets from PIT and then traded to OAK on same day; then got claimed by BOS from OAK and ultimately was returned to PIT)

2005 -- RHP Mitch Wylie (released at end of spring training after SF did not accept back; re-signed on minor league deal and spent 2006 with Mets' Triple-A Norfolk affiliate; never reached majors)

Also note that in the Triple-A phase of the 2004 Rule 5 Draft, the Mets took Henry Owens (3 G with 2006 Mets before being traded to FLA with Matt Lindstrom in November 2006).