Source: Evans, Luis, Misch on waivers
11yAdam Rubin
A fans guide to abiding the LOL Mets
12dDevin Gordon
Jeff Passan answers 20 burning questions about the MLB playoffs
12dJeff Passan
What's next for the New York Mets after Luis Rojas' departure
13dBradford Doolittle and David Schoenfield
Mets move on from Rojas after 3rd-place finish
14d
Mets likely to make Rojas decision before others
18d
MLB Power Rankings: Where all 30 teams stand in the final week
18dESPN.com
Mets give Syndergaard start, shut deGrom down
20d
Your squad isn't going to the MLB playoffs? The No. 1 offseason question for each eliminated team
14dBradford Doolittle
Passan's early MLB free-agency tiers: Which stars are going to get paid this winter?
19dJeff Passan
MLB Power Rankings: Where all 30 teams stand as playoff picture comes into focus
25dESPN.com
Prospects who have taken the biggest step forward in 2021 for all 30 MLB teams
27dKiley McDaniel
Mar 28, 2011 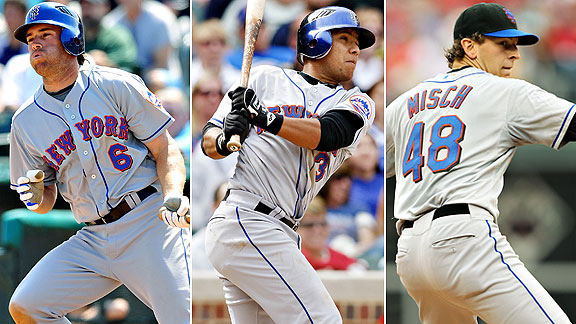 Nick Evans, Luis Hernandez and Pat Misch all landed on waivers Monday, according to a baseball source. Their fates should be known in 48 hours.

The Mets placed Nick Evans, Luis Hernandez and Pat Misch on waivers Monday, according to a baseball official who was not authorized to speak publicly because the process is secretive.

The results of the waiver process should be known Wednesday.

Manny Acosta is the lone Met in a tenous position who is out of options and may not have been placed on waivers Monday, according to the source. Acosta seemingly is the third combatant in the battle with Blaine Boyer and Jason Isringhausen for one relief spot.

The Padres had appeared interested in Hernandez via trade, but just acquired Alberto Gonzalez from Washington instead.

Misch can opt out if he clears waivers, but he is more likely to stay if he is unclaimed, because of his attractive minor league salary and his familiarity with the organization.

Evans would have to report to Triple-A Buffalo if unclaimed. His being placed on waivers means that Lucas Duda would break camp with the Mets if something should go awry with Carlos Beltran in the next day or two.