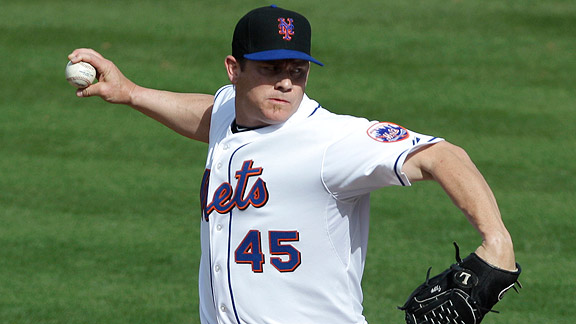 Jason Isringhausen has decided to remain in Port St. Lucie for two weeks.

Jason Isringhausen has agreed to remain in Port St. Lucie for up to two weeks after failing to claim the final bullpen spot. If another team approaches Isringhausen in the interim about a major league opportunity, the Mets must either call up Izzy or let him depart.

"It's in their hands," Isringhausen said. "If another team wants me, what we've talked about is they have the right to call me up or let me go."

Blaine Boyer claimed the final bullpen spot, in part because he had an out in his minor league contract and could have become a free agent.

"From what I gather, from what they tell me, it's one of those things where some guys with the contract status and stuff like that, things needed to be done," Isringhausen said. "They're trying to, so to speak, stockpile arms. They gave me a shot, so I'm willing to help them out for a while and be somewhat of an insurance policy in case somebody does get hurt. I mean, nobody knows what's going to happen. ...

Isringhausen has not appeared in a major league game since June 13, 2009 with the Rays. He signed after an early camp tryout.

Isringhausen, 38, is confident based on his strong spring showing (1.29 ERA) that he will have a home in the majors somewhere this season.

"I would think so, unless things should go haywire, which I don't foresee happening," Isringhausen said. "So we'll stay down here and get my innings in. It doesn't matter who you're facing. I'll just work on my pitching still and face hitters. It's better to have some kind of structured outline rather than just going home and trying to throw at home."