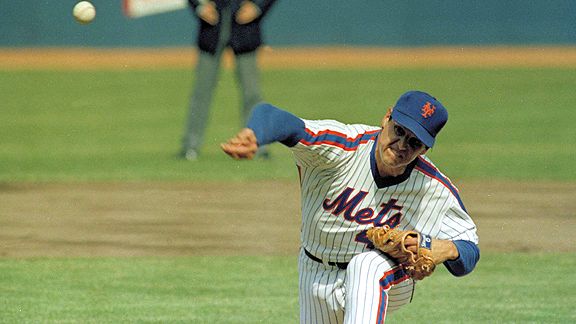 Tom Seaver got help from Mike Howard both on and off the field upon his return to the Mets in 1983 .Each Thursday, Mark Simon will commemorate the Mets' 50th season with stories and notes related to the history of the team. The goal will often be to find little-known notes, facts and anecdotes, and we begin that mission with our first piece here:

For some major leaguers, Opening Day marks the beginning of what they hope will be long and prosperous baseball careers, or a fresh start to a new season filled with hope and excitement.

In the case of former Met Mike Howard, he’s the rare player for whom Opening Day represents the ending of a big league career.

In the 1983 season opener, the Mets beat the Phillies, 2-0, in a game most remembered for Tom Seaver’s return to the team after five-and-a-half seasons with the Reds. Forgotten is their right fielder that day, Howard, was the last to start the opener at that position before the arrival of Mets legend Darryl Strawberry. 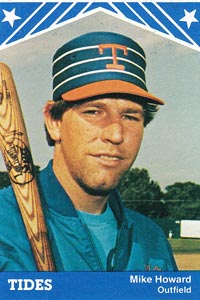 Howard as a Tidewater Tide in '82.

With the game scoreless in the sixth inning, Howard came up with the bases loaded and no outs, and singled off Hall of Famer Steve Carlton to put the Mets ahead. It would be the last of 66 major league at-bats for Howard, who finished with a .182 batting average and 12 base hits.

“The thing I remember about that day was that I was with Seaver warming up in the bullpen,” Howard said. “When he finished throwing, he said ‘I need to do something' [to kill time before the game started], so I pointed to a guy who had a cast on his arm, or was in a wheelchair and said to Tom that he should give the guy a baseball. I was thinking ‘Wow. Tom Seaver just asked me what to do.’ That was cool.”

The Mets had a glut of outfielders in the mix before Strawberry’s arrival, so others got opportunities in the next few games. After not needing him for two-and-a-half weeks, the Mets sent Howard to Triple-A. Howard remembers clubhouse manager Herb Norman telling him to take his Mets uniform with him. Howard declined.

“I’ll be back,” Howard said, not knowing at the time that he wouldn’t be.

“I was a utility guy, the insurance man,” said Howard, whose nickname was “Mad Dog” because his style of play emulated that of Pete Rose, such as how both sprinted to first base after drawing a walk. “The problem with being the insurance guy is that you never use him, because you don’t know when you’re going to need him.”

Howard went into a funk after being demoted, hitting below .200 at Triple-A. He was sent to rookie ball with the intent of adding catcher to the list of positions he could play. (Howard played every one, including pitcher, at some point in his pro career.) But the Mets didn’t recall him.

Howard became a free agent that offseason, signed with the Pirates organization, but retired after an injury-filled season and the knowledge that his wife, Vicki, was pregnant.

According to the Elias Sports Bureau, he’s one of only three players since the end of World War II whose last major league game was as a starter in his team’s opening game (the others: Lew Riggs of the 1946 Dodgers and Manny Lee with the 1995 Cardinals).

Howard has held a variety of jobs since retiring from baseball. For the last 10 years, he has been self-employed as a painter and carpenter in Jackson, Miss., where he lives with his family.

A year after the Mets put leftover items from Shea Stadium up for sale, Howard’s daughter, Kallie, found both his jersey, and an eight-foot canvas picture that hung in the ballpark that featured her father in the background, on E-Bay. She bought them and gave them to her father for his birthday. They’ve since replaced her wall of Barbie dolls in the family home.

Howard admitted difficulty in making the transition from ballplayer to former ballplayer, but in the last few years, he’s embraced it. This year, he went to spring training in Arizona to catch up with his ex-roommate, Giants manager Bruce Bochy. And he’s well known in Jackson.

“There are four Mike Howards in Jackson,” Howard said with a laugh. “I’m the ballplayer, not the optometrist. I can’t go anywhere in town without people saying they know me.”

1--The Mets' five-game Opening Day win streak is the longest current streak in the major leagues, and their 32-17 mark on Opening Days is the best by any team.

2--The Mets' subsequent Opening Day right fielder, Strawberry, has the team’s best batting average in season openers. He was 11-for-22 (.500) with four home runs and eight RBIs.

5-- Feeling down about the Mets coming into 2011? At least it’s not 1963, when the Mets followed up their 120-loss season. The famous story told in the 1981 book This Date in Mets History is that after the Mets' first pitch of the season sailed wide, a fan in the upper deck of the Polo Grounds yelled loud enough for the ballpark to hear: “Wait ‘till next year!”