The weight of a disastrous 2010 season had been lifted from right-hander Brad Holt’s shoulders even before he threw his first pitch this year.

The 33rd overall pick in the draft three years ago out of UNC Wilmington, Holt went a combined 3-14 with an 8.34 ERA in 24 appearances (23 starts) between Double-A Binghamton and then Class A St. Lucie after a demotion last season. His control problems included 79 walks and 17 hit batters in 95 innings. 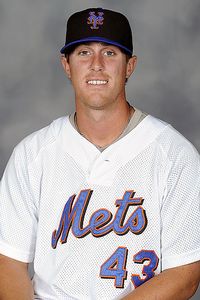 But team officials swore Holt had started to make strides at the team’s fall instructional league. Then, Holt’s Arizona Fall League performance was positive enough that he actually was selected to the AFL’s Rising Stars all-star game (although he eventually was scratched because of bone spurs in his right elbow that have since quieted).

By the time the 24-year-old Holt took the mound for his first 2011 start on Saturday at Akron -- at a site where he allowed five runs and recorded only one out last April before being pulled -- Holt’s confidence mostly had been restored.

“I think the weight was kind of lifted more toward the end of instructs and in Arizona,” Holt said. “Once I came into spring training I wasn’t really too worried about the upcoming season. I felt really confident in being back on track and having whatever was causing the bad year to not be there.”

Still, it did not hurt that Holt validated the renewed enthusiasm with a positive showing last weekend against Cleveland’s Double-A affiliate. Holt limited Akron to three hits and two walks while striking out three in five scoreless innings. Rehabbing major league Grady Sizemore went 0-for-2 with a walk against Holt.

“My start there last year at the beginning of the season, it didn’t go very well,” Holt said. “I had that a little bit in the back of my head. But I was confident that nothing was going to change from the Fall League and spring training.”

“I think last year was just his command and just his maturity level on the mound,” said Mike Nickeas, who caught Holt with Binghamton last season. “When something negative happened to him, he had a tendency to get down. From what I saw in the spring, and from what I hear from the guys who have spoken with him, he’s made those adjustments and he’s throwing the ball really well.”

Holt acknowledged he even threw balls to the backstop last year. He labeled it a “mental year.”

“I wasn’t throwing strikes last year,” Holt said. “Right now pitching in general is coming together for me. I’m learning when to use pitches, how to set up hitters the way I want. In order to do that, location is a huge part obviously. I think it’s just using all four of my pitches. Now that I have the cutter, that’s opened up a few more doors as far as how to attack a hitter. They stayed on me in spring training about using my changeup. It’s become a really good pitch. My changeup has developed a lot. I used it a good bit in my start. I’m just mixing up my pitches and not staying so much fastball/curveball the whole time. I’m giving hitters more to look at.”