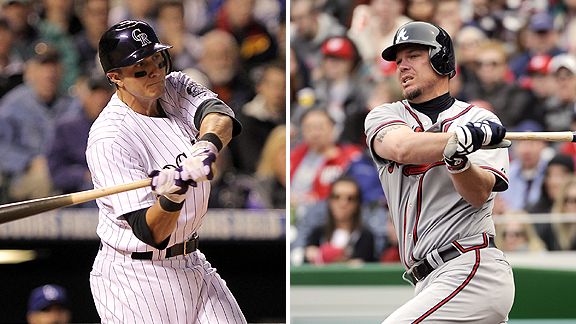 Troy Tulowitzki and Chipper Jones are among those who have caused great pain to Mets fans recently.

Each Thursday, Mark Simon will commemorate the Mets 50th season with stories and notes related to the history of the team.

At the next stop for the Mets, they'll see the former standard-bearer for such greatness, Chipper Jones.

Jones set the barometer for all future efforts to be measured against in a three-game series from September 21-23, 1999. With the Braves one game ahead of the Mets for the NL East lead, Jones put on a one-man show, the magnitude so impressive that it basically cinched him the MVP award. He hit home runs in all three games of the series (including a game-winner in the series opener) and drove in seven runs in a three-game sweep.

Mets fans have often been reminded of that performance over the last 12 years (Gary Cohen mentioned it again in Thursday's telecast) that it got us to wondering about others whose Jones-like (or Tulowitzki-esque) efforts may have been forgotten. So we went looking through Baseball-Reference.com for others to consider. Here are a few we found:

From the 1960s: Willie Stargell and Dick Allen

Willie Stargell still holds the record for the most home runs by anyone against the Mets with 60. In 1966, he transitioned from great player to megastar, solidifying that rep with a four-game July series against the Mets in which he went 9-for-15 with three home runs and 10 RBI.

Dick Allen nearly matched that in 1968, The Year of the Pitcher. In a three-game series, he had four home runs and nine RBI, including a multi-homer game against young Mets flamethrower, Nolan Ryan.

Before the 1973 Mets became the "Ya Gotta Believe" team that reached the seventh game of the World Series, they struggled through the majority of the regular season.

Among those who took best advantage was Astros outfielder Cesar Cedeno, than an exciting young star who some touted as the next Willie Mays. In a three-game series in early May, Cedeno was 10-for-18 with six runs scored, netting at least three hits in every game.

Cedeno would come back to hurt the Mets 12 years later, in a different phase of his career as a pinch-hitter extraordinaire with the Cardinals, beating the Mets with an extra-inning home run in a late-season game that had great impact on that year's pennant race.

Before there was Chipper Jones, the Braves megastar was Dale Murphy, a power-hitting outfielder who won back-to-back MVPs in 1982 and 1983.

It wasn't so much one series that made Murphy's reputation against the Mets, but multiple ones. Tulowitzki's barrage marked the 65th time that a player homered in at least three straight games against the Mets at any point in his career.

Murphy had the most such streaks-- three of them, including one during a three-game sweep of the Mets in 1987, in which all three games were decided by one run.

Murphy also is remembered in Mets lore for homering off Dwight Gooden to keep his consecutive games streak alive, in a pinch-hitting appearance with a severely injured hand.

From the 1990s, Chipper Jones and Ryne Sandberg

We already mentioned Chipper Jones and thought nothing more needed to be said. But the Elias Sports Bureau gave us one great challenger.

We cheat a little bit to include Mets killer Derek Jeter on this list of series stingers, the easiest example to cite being the 2000 World Series, in which Jeter won MVP honors by hitting .409 with six runs scored, including a leadoff home run in Game 4 that marked the turning point of the series.

Jeter, by the way, is a smidge away from having the best batting average of anyone against the Mets. His .37987 trails only Rico Carty's .380.

But even Jeter would have to be impressed by the player who set the standard for the 2010s, Tulowitzki, who is etching a rep as a Jeter-like player in more ways than one.