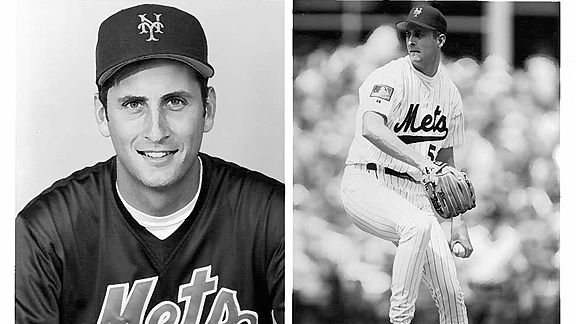 Each Thursday, Mark Simon will commemorate the Mets' 50th season with stories and notes related to the history of the team.

Chris Young does not stand alone as the tallest pitcher in Mets history. Before Young came 6-foot-10 left-hander Eric Hillman.

Hillman is oft-forgotten in Mets history because, though he stood out in a crowd, his stats weren’t impressive. In 49 appearances over three seasons, he was 4-14 with a 4.85 ERA. Hillman had the misfortune of being on the 1993 Mets, who went 59-103 and became known as “The Worst Team Money Could Buy.”

Hillman didn’t throw hard, with a fastball that was in the mid-80s. So, like Young, he tried to take advantage of pitching at a higher trajectory by developing a sinker and a slurve. He admits: “I couldn’t throw the ball by guys, so I tried to trick 'em. Some days were better than others.”

Young has had more success in the majors than Hillman did because he was able to find what could get hitters out. Hillman, who later worked as a broadcaster on the Colorado Rockies' postgame show for three years, was impressed by Young’s ability to hide the ball well and use his glove and motion to make it hard for hitters to see the ball.

The best moment of Hillman’s career was a five-hit shutout of the Dodgers in Los Angeles on July 25, 1993. It was the second start in a two-start stretch in which he pitched 17 scoreless innings. But it became secondary to the story of teammate Vince Coleman throwing a firecracker into a crowd.

“That team was an absolute disaster,” Hillman said. “I was 26 and I came up to the big leagues, which had been my dream since I was a little kid. And all I saw were players who were more concerned about their jewelry, their cars and their real estate than the outcome of games.”

The best days of Hillman’s career came in Triple-A, where he went 10-1 for the Mets' Norfolk affiliate in 1994, and in Japan, where he pitched for four seasons and won the Japanese equivalent of the Cy Young in 1996 for the Bobby Valentine-managed Chiba Lotte Marines. (Hillman liked Valentine so much he recently asked if he could be his bullpen coach if Valentine returned to the major leagues.) A shoulder injury ended his career after a comeback attempt in the States was unsuccessful. He retired in 2000.

Hillman’s favorite on-field moments were meeting Cubs broadcaster Harry Caray, who mistook him for teammate Dave Magadan, getting “mauled” by then-Reds owner Marge Schott’s mascot dog, Schottzie, and laughing so hard at jokes being told in the dugout that his eyes would regularly water up.

Hillman might have the most unique post-playing career in Mets history. He and his wife Heather own Purepuppy.com, which develops and sells dog care products, such as shampoos and conditioners, with an emphasis on ingredients that are all natural. Hillman’s other passion, besides baseball, is the environment. On the back of one of his baseball cards, it says he aspired to someday become a marine biologist.

“In a world where gas prices are out of control, my wife and I are looking to do our part,” Hillman said. “I’ve pushed very hard for recycling in this area and making businesses more responsible. There is only so much in this world. We need to be able to reuse it.”

Hillman, who lives in Denver and turned 45 on Wednesday, is self-deprecating about his career and his height. He noted that the best thing about being 6-foot-10 is being the first to know that someone else is balding. He also jokes that his company's product “is as natural as the tears Mets fans shed every time I pitched.”

But he did go on the message board at the popular fan site “Ultimate Mets Database” when a couple of posters criticized his pitching ability.

Hillman even contacted one who claimed that Hillman ignored him when asked for an autograph, and the two spoke at length on the phone. Hillman wants Mets fans to remember him in a positive manner, like one fan he met at Mets Fantasy Camp a few years ago, who thanked him for bringing him into the Mets' dugout as a little kid.

Hillman dealt with some tough times and bad teams during his Mets tenure, but has always been very positive about his time in the major leagues. That positivity has carried over into his post-playing career.

“I always tell my two kids that every day is a good day,” Hillman said. “We’re on the fun side of the soil here.”

Five Things You May Not Know About Tall Mets

With help from Baseball-Reference.com

1--Hillman is one of 25 players estimated at 6-foot-6 or taller to play for the Mets. Hillman and Randy Johnson were the tallest players in major league history until 6-foot-11 Jon Rauch surpassed them. (Some sources list Rauch as 6-foot-10 as well.)

3-- Prior to Hillman, the tallest Met was 6-foot-9 reliever Terry Bross, a former center for St. John’s, who pitched in eight games in relief in 1991. Bross is currently an agent.

5-- The five pitchers in major league history listed at 6-foot-10 or taller are Hillman, Young, Johnson, Rauch and former Royals left-hander Andy Sisco. They combined for 394 major league victories, five of which have come for the Mets.