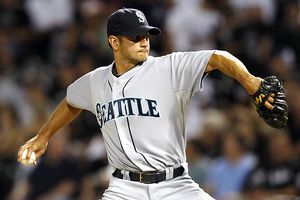 The five-time Atlantic League Champion Somerset Patriots have announced that right-handed pitcher Brian Sweeney has been signed by the New York Mets and will report to Triple-A Buffalo. Sweeney started Opening Day on April 29 for the Patriots, picking up the win while striking out eight in seven innings.

Sweeney has 73 games of major league experience with the Seattle Mariners and the San Diego Padres. He has a major league career record of 4-2 with a 3.38 ERA in 117 innings pitched.

He pitched for the Mariners last season, where he appeared in 24 games at the major league level and finished with a 3.16 ERA.

He also has three seasons of experience in Japan, playing for Nippon from 2007-2009. Sweeney joined the Patriots in spring training in 2010, but was signed by the Mariners when camp began.