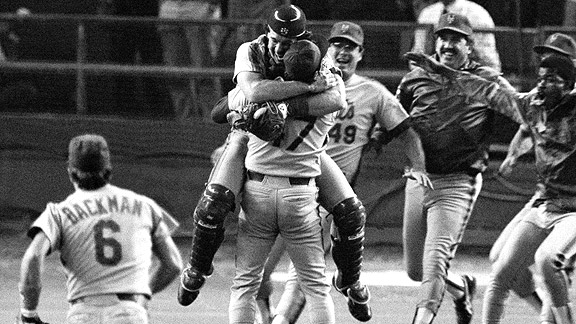 The Mets clinched a pennant in Houston in 1986, but they've also played many other memorable games in that city.

Each Thursday, Mark Simon will commemorate the Mets' 50th season with stories and notes related to the history of the team. This week's piece is on the city the Mets visit next-- Houston.

Think of the Mets and their time spent in Houston and the thoughts immediately turn to Game 6 of the 1986 NLCS, in which the Mets rallied from three runs down to tie in the ninth inning, then clinched the series by outscoring the Astros 3-2 in the 16th inning of a 7-6 win.

It is a game considered among the greatest in baseball history and is a significant part of the story of the Mets most recent championship season.

But Houston has been the site for much more than that with regards to the Mets. The Astros and Mets came into baseball together as expansion teams in 1962 and they shall be forever linked in many ways.

As fellow blogger Greg Prince said: “That’s what happens when you separate fraternal twins at birth.”

Houston is a city perhaps best known as the home of NASA, whose astronauts strive to reach the greatest of heights. So too is it a place in which the Mets have done so.

Let’s review some of the bonds these teams share from the past 49 seasons of Mets visits to Houston.

Including postseason play, the Mets have played 48 games lasting at least 15 innings. They’ve played 29 of those games in New York. The city in which they’ve played the second-most marathons is Houston (five). The most famous of those is that 1986 playoff clash.

They won one other. The most recent Houston marathon was this 17-inning clash on July 7, 2007, best known for Carlos Beltran’s game-saving staggering catch of Luke Scott’s bid for a walk-off hit in the 13th, while climbing up “Tal’s Hill” in center field. Beltran would then get the winning hit in the 17th inning, leading to a 5-3 victory, one in which Mets relievers combined for 10 scoreless innings.

It was a measure of revenge for Beltran, who has been vilified for leaving the Astros for the Mets prior to the 2005 season.

The best game ever (by a Met)

The greatest offensive performance in Mets history came on Aug. 30, 1999 in Houston, when Edgardo Alfonzo went 6-for-6 with three home runs and five RBIs in a 17-1 rout of the Astros.

Alfonzo was one of three players (along with Jim Wynn and Jeff Bagwell) to hit three home runs in that ballpark, one that was notoriously difficult for power hitters. Alfonzo is the rare Met who loved to hit in Houston. He hit .371 there in his Mets career.

The best series ever

With two weeks left in the 1998 season and the Mets deadlocked with the Cubs in the NL wild card race, the Mets played in what was arguably their most exciting four-game series, the regular-season equivalent to the 1986 NLCS. The opponent was the same as it was then: the Astros in Houston.

The next day, the teams played an epic doubleheader. In the topsy-turvy first game, the Mets tied the game in the ninth, blew a lead in the 11th, and lost in the 12th on a home run by Derek Bell. In the nightcap, a John Olerud three-run homer in the eighth gave the Mets an 8-4 comeback triumph.

The series finale was one of the most excruciating games in Mets history. The Mets had at least one baserunner in each of the first eight innings, but were down 2-0 in the ninth. With one on and two out, an Olerud single kept the game going for Mike Piazza, who worked the count to 2-2 before crushing a long home run against Astros closer Billy Wagner. The Astros would tie the game in the bottom of the ninth, but the Mets would be victorious in the 11th, when pinch-hitter Todd Hundley (displaced as a regular by Piazza) homered.

A not-so-miraculous place to be

The Mets have had their share of rough times in Houston as well. Let's review them in reverse chronological order.

• In the summer of 1986, four players spent a night in jail, the result of a dispute at a local bar, a major source of embarassment for the franchise at the time.

• In 1977, Tom Seaver beat the Astros in his final game as a Met, prior to being traded to the Cincinnati Reds on June 15.

• The 1969 Miracle Mets played six games in Houston but somehow didn’t win any of them. The Astros team was a Mets bugaboo during that championship season, the only team against which the Amazin's had a losing record (2-10).

Houston, We Have a Problem
1969 Mets in Houston

The Mets' chief nemeses that season were pitchers Tom Griffin and future Astros manager Larry Dierker. Griffin struck out 22 in 17 scoreless innings in two meetings in Houston. Dierker, who took a perfect game into the ninth inning against the Mets in 1965, was similarly good, tossing two complete games in the Astrodome and winning two other matchups at Shea Stadium.

• Lastly, the first Mets-Astros series in the Astrodome in late April, 1965. In the Mets' first game in baseball’s first indoor facility, the Mets were one out from a win, but lost on a two-run double by Eddie Kasko, a ball that Mets left fielder Joe Christopher lost in trying to glance skyward at the ballpark roof.

Manager Casey Stengel was not pleased. This Date in Mets History recounts how Mets management claimed the ballpark’s air conditioning system was rigged to blow out when the Astros were at-bat, and in for the visitors' turns.

The other highlight from that series was where Mets broadcaster Lindsay Nelson was situated for the call of the next game … in a gondola, 208 feet above second base.

The Mets would lose the ballgame, but it was a day in which Nelson would reach the highest of heights. The Mets had their share of such moments in this city. Perhaps another one awaits this weekend.