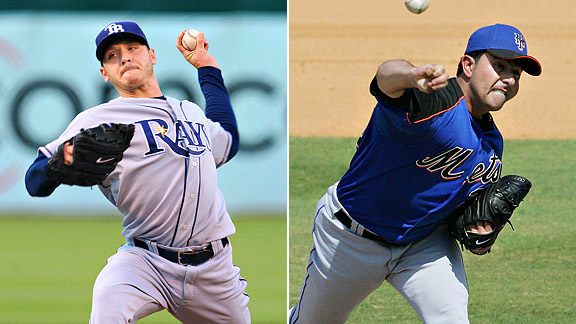 The 2004 Kazmir-Zambrano swap doesn't look quite as bad these days, but it was still plenty bad.Scott Kazmir’s career swoon -- which included his release by the Los Angeles Angels last week, despite his still being owed another $14.5 million -- lessens the sting of the one-time phenom's trade by the Mets to Tampa Bay.

But even if history will never consider the July 30, 2004, trade in the same unfavorable light as the deal that shipped out Nolan Ryan, the Kazmir deal still ought to be regarded as one of the worst trades in organization history. That's the case simply because of what the Mets could have commanded in a trade elsewhere had they let it be widely known Kazmir was available, as opposed to impulsively swinging a deal for damaged-goods Victor Zambrano.

The Wilpons, having a couple of years earlier bought out co-owner Nelson Doubleday, and in a supposed pennant race for the first time since that event, were overreaching into baseball decisions with their newly unchecked power.

What makes it doubly bad is this never-disclosed revelation: The Mets' front office wanted to annul the trade on medical grounds, but were overruled by ownership, a source employed by the organization in 2004 told ESPNNewYork.com. The Wilpons, the former employee said, did not want to rock the boat given their relationship with commissioner Bud Selig -- the same relationship that is now securing them wide latitude as they deal with financial woes.

The revelation recently came up with the former team employee during a conversation about Kazmir’s departure from the Angels.

At the time of the 2004 Kazmir-Zambrano swap, and a trade with the Pittsburgh Pirates to acquire Krisand Anna Benson on the same day, the Mets were six games behind the Atlanta Braves entering a three-game series at Turner Field. Benson was charged with seven runs in five innings the following day as the Mets lost to the Braves 8-0 in the ex-Pirate's debut with the Mets. The following day, Tom Glavine and the Mets were swept out of Atlanta with a 6-5 defeat to drop nine games behind the Braves in the division.

Zambrano, acquired for a postseason push that never materialized, actually did not take the mound until Aug. 5 -- six days after the trade, and 11 days after he had last appeared for Tampa Bay. That was partly so pitching coach Rick Peterson could fix Zambrano, and mostly to do with Zambrano’s elbow problems. Zambrano would make only three starts that season in a Mets uniform before being shut down. Zambrano left the mound in his final outing in Colorado and was in tears because of the discomfort.

The Mets never got closer than within eight games of first place the remainder of the season and finished 71-91, and Art Howe departed as manager, despite having two years and $4.7 million left on his contract. Jim Duquette's powers were usurped as general manager as Omar Minaya was brought in from the Montreal Expos with "full autonomy" to run baseball operations.

Kazmir, 20 years old at the time of the deal, actually did not believe Double-A Binghamton manager Ken Oberkfell when the southpaw was informed of the deal. But it worked out well for Kazmir, in spite of what has happened recently. Kazmir made his major league debut that Aug. 23 in Seattle with five scoreless innings for Tampa Bay. He was selected to the All-Star Game in 2006 and 2008 before his career downturn.

The Mets never did a comprehensive medical review of Zambrano before completing the deal. They relied on an X-ray -- not an MRI -- administered by the Rays, which would not show the extent of elbow ligament damage. Mets staffers subsequently suspected, the former team employee said, that the Tampa Bay administration at the time had not supplied the full trainers' log that documented the issues Zambrano was having in the weeks before the trade. Pages, they believe, were omitted.

There has been precedent for undoing/revising trades because of damaged goods. For instance, the Yankees were fuming when they acquired Graeme Lloyd and Pat Listach in August 1996, and it turned out Lloyd had an arm problem and Listach had a broken foot. After the regular season, Listach was returned to the Brewers, and Ricky Bones -- now the Mets' Triple-A pitching coach -- was substituted.

Still, Mets ownership would have none of trying to annul the Kazmir-Zambrano trade. Zambrano went 10-14 with a 4.42 ERA in 39 games (35 starts) for the organization before walking away as a free agent after the 2006 season.