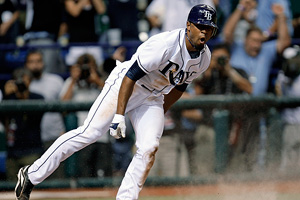 The Mets signed Fernando Perez and assigned him to Triple-A Buffalo.

The Mets have signed outfielder Fernando Perez to a minor league contract and assigned him to Triple-A Buffalo. Perez could replace Fernando Martinez on the Bisons' roster. Martinez has a hip injury and has not played since Friday.

He hit .238 in 76 games with Triple-A Iowa in the Chicago Cubs organization this season.

Perez is a published poet. He told Paul Sullivan of The Chicago Tribune earlier this year: "I was trained as a poet and I write a lot of poetry still, but since playing baseball I've started to write personal essays more. I've also experimented with fiction. So there's lot of stuff I write that makes it out occasionally."

Perez scored the winning run in Tampa Bay's Game 2 win in the ALCS against Boston in 2008 on a shallow sacrifice fly.