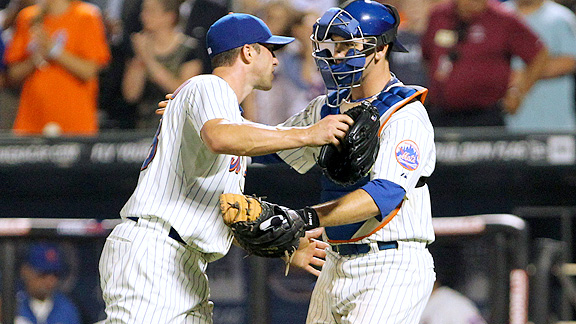 Cap-tips to a few folks in ESPN Stats & Information and Baseball-Reference.com for the nuggets below.

By the Bill James Game Score metric (found in every ESPN.com box score), Chris Capuano just pitched the finest game of the baseball season and one of the best games in Mets history. A hodgepodge of notes and numbers:

• The James system rates starts, with the number usually coming between 0 and 100-- higher being better. Pitchers get rewarded for finishing innings, not allowing baserunners, and striking batters out. Capuano finished with a 96, the highest Game Score of 2011, the highest by any Mets pitcher since David Cone scored a 99 with a 19-strikeout shutout of the Phillies on October 6, 1991, the final day of that season. The Cone start marks the last time a Mets pitcher finished a game with 13-or-more whiffs and no walks.

• Capuano is the second pitcher in Mets history with a shutout, allowing two hits or fewer, in which he struck out at least 10 and walked none.

Tom Seaver had the other-- July 9, 1969 against the Cubs, a game widely considered the best-pitched game in Mets history (lost his perfect game with one out in the 9th)

• No major league pitcher had thrown a shutout, in which he struck out at least 13 and allowed two baserunners or fewer since Erik Bedard for the 2007 Orioles. No NL pitcher had done it since Randy Johnson threw a 13-strikeout perfect game against the Braves and Jason Schmidt threw a one-hit, 13-strikeout shutout against the Giants on the same day, May 18, 2004.

• It's the third time in Mets history that a pitcher pitched a shutout against the Braves in which he allowed two hits or fewer. Mickey Lolich threw one in 1976. Sid Fernandez notched one in 1986.

• It's actually the second time this season that the Mets pitched a two-hitter against the Braves. They also did so on June 15, beating Tim Hudson in the process. Four Mets pitchers combined for 12 strikeouts, one fewer than Capuano, in that one.

• This was the first home game in which the Mets allowed two hits or fewer against the Braves since a 4-1 win by the Mets and Bob Ojeda on July 20, 1989. That also means it's the fewest hits that a Chipper Jones-led Braves team has ever had against the Mets in New York.

• A Capuano pitching breakdown from our pitch-performance data:

Four of the five strikeouts with his changeup came against pitches that were out of the strike zone.

Both hits were on chest-high changeups that nicked the outside corner of the plate.

• Capuano's strategy was to work around the plate. Of his 122 pitches, only 50 were deemed by the Pitch F/X pitch-tracking system to be in the strike zone (41 percent). Only twice all season had Capuano thrown a lower percentage of pitches in the strike zone in a game.

In fact, 28 of the 38 two-strike pitches Capuano threw were out of the the strike zone. But the strategy worked. In fact, it was almost perfect.