Chris Capuano tossed a three-hit shutout Friday against the Atlanta Braves. And, after allowing two runs in five innings and receiving a no-decision Wednesday night against the Florida Marlins, Capuano’s ERA now stands at 4.41 in 159 1/3 innings.

So does Capuano feel like he has reestablished himself following a second Tommy John surgery and demonstrated enough to secure a multiyear deal as a starting pitcher somewhere in the majors this offseason?

“I’m not sure,” said the 33-year-old Capuano, who missed the 2008 and ’09 seasons. “I have five starts left, so my goal is to get out there and throw as many innings up as I can in those five starts and see what happens. If there’s something like that out there, that would be great. If it’s a one-year deal or something, at this point in my career I’m excited to have the opportunity to go out there as a starting pitcher. I’m not as concerned with the contracts and everything else. As long as I have an option next year to start, I’ll be happy.” 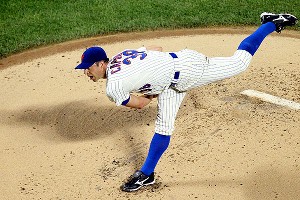 Coming off a 122-pitch shutout, Chris Capuano allowed two runs in five innings and was pulled at 99 pitches against Florida.

Capuano actually entered the night with the sixth-fewest innings logged in the National League among pitchers who have made at least 25 starts.

But Capuano feels he is a starting pitcher. He suggests recent tinkering with his between-starts routine has increased his stamina later in outings.

“Certainly my last start and tonight, I felt just as strong -- or stronger -- at the end of the game than I did early on,” Capuano said. “I think I may have touched on something in my conditioning program that’s helped me figure out how to get that late-inning stamina.

“For me, that was a simple adjustment in one area of my in-between routine. It’s pretty simple: It’s just pushing myself a little more in my cardio work, whether that’s running, an arm bike, the elliptical stuff, spin bike. I’ve backed off of throwing a little bit, but I’ve bumped up that stuff to see if I can get in a little better shape that way. It’s seemed to help me feel better.”