Batista reaches the century mark
10yMike Mazzeo
Carrasco has bone fragment removed from elbow
5d
A fans guide to abiding the LOL Mets
20dDevin Gordon
Jeff Passan answers 20 burning questions about the MLB playoffs
20dJeff Passan
What's next for the New York Mets after Luis Rojas' departure
21dBradford Doolittle and David Schoenfield
Mets move on from Rojas after 3rd-place finish
21d
Mets likely to make Rojas decision before others
26d
MLB Power Rankings: Where all 30 teams stand in the final week
26dESPN.com
Mets give Syndergaard start, shut deGrom down
27d
Your squad isn't going to the MLB playoffs? The No. 1 offseason question for each eliminated team
22dBradford Doolittle
Passan's early MLB free-agency tiers: Which stars are going to get paid this winter?
27dJeff Passan
MLB Power Rankings: Where all 30 teams stand as playoff picture comes into focus
33dESPN.com
Prospects who have taken the biggest step forward in 2021 for all 30 MLB teams
35dKiley McDaniel
Sep 1, 2011

Here’s a great piece of trivia, courtesy of the Elias Sports Bureau.

The last pitcher to notch his 100th win in his 40s prior to Miguel Batista on Thursday night? 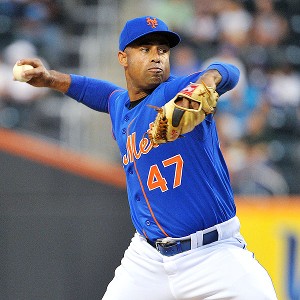 “It means a lot,” said the 40-year-old Batista, who became the 37th active pitcher to reach the century mark after he pitched six innings of two-run ball, which lifted the Mets to a 7-5 win over the Marlins at Citi Field.

Unfortunately for Batista, however, reaching the 100-win club doesn’t guarantee another start.

Terry Collins intimated the Mets very possibly would select a pitcher for the start in five days from the minors. Chris Schwinden, even though he is on an innings limit at Triple-A Buffalo, fits that profile. Left-hander Pat Misch would be the minor league alternative.

“I just want to help this team win,” Batista said of what he wants to accomplish in September.

He did just that on Thursday night.

After allowing runs in his first two innings, Batista settled down. At one point he retired eight Marlins in a row.

“I think I was a little eager to get this game out of the way,” said Batista, who allowed six hits, walked three and struck out three. “I don’t believe I was nervous -- I’m a little too old for that -- just a little anxious to start the game and get it going. But I had crazy movement on my fastball today, and it took me a while to get it down and get it to sink over the plate.”

Batista saved the ball from his 100th win, and said he was going to give the ball to his mother.

“Probably my mom will find a place for it,” Batista said. “She has my World Series ring (from 2001 with Arizona), and whatever else. She’s the one that keeps everything.”

Batista became the fourth pitcher to get his first win with the Mets in his 40s, joining Roberto Hernandez, Orel Hershiser and Warren Spahn, according to Elias.

Thursday’s win was Batista’s first victory as a starter since July 27, 2010, when he threw five shutout innings in an emergency outing for the Nationals after phenom rookie Stephen Strasburg began experiencing shoulder soreness.

And it’s a victory that he’ll remember forever.