Parnell, Duda having growing pains in 9th
10yAdam Rubin
A fans guide to abiding the LOL Mets
10dDevin Gordon
Jeff Passan answers 20 burning questions about the MLB playoffs
10dJeff Passan
What's next for the New York Mets after Luis Rojas' departure
12dBradford Doolittle and David Schoenfield
Mets move on from Rojas after 3rd-place finish
12d
Mets likely to make Rojas decision before others
16d
MLB Power Rankings: Where all 30 teams stand in the final week
16dESPN.com
Mets give Syndergaard start, shut deGrom down
18d
Your squad isn't going to the MLB playoffs? The No. 1 offseason question for each eliminated team
12dBradford Doolittle
Passan's early MLB free-agency tiers: Which stars are going to get paid this winter?
17dJeff Passan
MLB Power Rankings: Where all 30 teams stand as playoff picture comes into focus
23dESPN.com
Prospects who have taken the biggest step forward in 2021 for all 30 MLB teams
25dKiley McDaniel
Sep 4, 2011 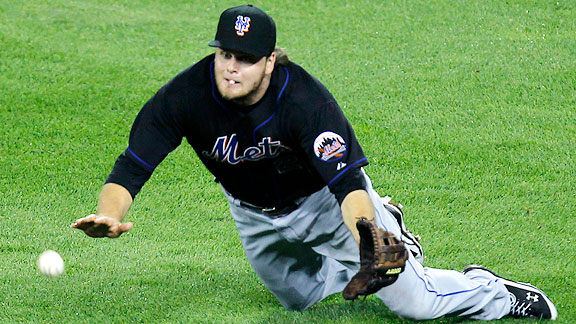 Lucas Duda attempts an ill-fated catch with the bases loaded in the ninth. The ball got behind him, allowing the tying and winning runs to score.

After converting his first four save opportunities since succeeding Jason Isringhausen as closer, Bobby Parnell suffered a blown save Saturday night. Parnell loaded the bases, then surrendered a broken-bat, two-run single to right field by Ryan Zimmerman as the Nationals produced an 8-7 walk-off win.

Afterward, Terry Collins said he would continue to use Parnell as the closer and groom him for the potential 2012 role. 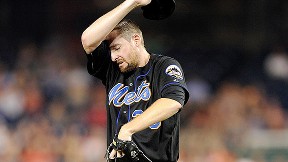 Bobby Parnell suffered the blown save Saturday at Nationals Park.

No reverting to Isringhausen. No using Manny Acosta, who tossed two scoreless innings with five strikeouts to hand a one-run lead to Parnell for the ninth.

After Ian Desmond bunted both teammates ahead, Parnell faced two runners in scoring position with one out. Collins opted to intentionally walk Roger Bernadina to load the bases for more-feared Ryan Zimmerman, trying to set up a double play.

"I didn't want to, but we’ve got to try to get a double play," Collins said. "… We're going to end up facing Zimmerman anyway."

On the game-ending play, Duda made a diving attempt to catch Zimmerman's bloop in front of him. That allowed the ball to scoot behind Duda, and two runs to score instead of just the tying run.

Collins called the ninth inning a learning experience for Duda in right field as well as Parnell as closer -- roles they may have in 2012.

"It's pretty hard to ask a guy that's out there for the first time, but you can't leave your feet on that," Collins said of Duda's play. "You have to at least keep that go-ahead run from coming in."

As for his manager's alibi labeling the aggressive play a learning experience in right field, Duda said: "I guess you could say that. But there comes a time where those excuses get kind of old. I know better than that to not dive right there. I just thought I could make a play and I didn't. It cost us the game right there."