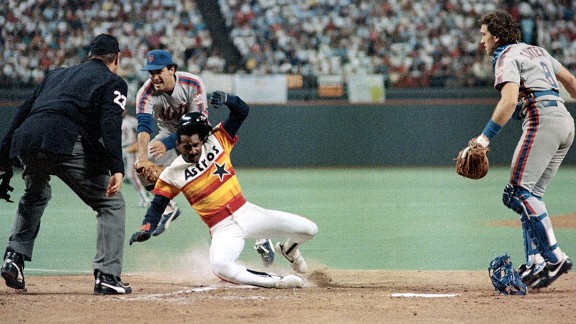 Bob Ojeda tagging out Kevin Bass at home was one of the many pivotal plays in the 1986 postseason.Over the next three weeks, Mark Simon will reminisce here about the 1986 postseason, which ended in a Mets championship. Here's a capsule look at Game 2 of the 1986 NLCS, played on this date, 25 years ago

Trailing by a game after losing Game 1 to Mike Scott, the Mets rebounded to beat a former Met, but it wasn't as easy as the final score indicated.

Nolan Ryan retired the first 10 Mets hitters before the team broke through for two runs in the fourth inning on a Gary Carter RBI double and Darryl Strawberry sacrifice fly, and three runs in the fifth inning (an RBI single by Wally Backman and a two-run triple from Keith Hernandez).

Winning pitcher Bob Ojeda (who was 18-5 in the regular season) escaped trouble repeatedly. The Astros had at least one baserunner in every inning from the second through the seventh, but only managed one run. Ojeda pitched a complete-game 10-hitter to even the series at a game apiece.

With the game scoreless and the Astros threatening with runners on first and third and one out in the bottom of the second inning, Alan Ashby hit a chopper that Ojeda fielded on the run in front of home plate. He then tagged oncoming baserunner Kevin Bass to prevent the Astros from scoring first.

Media reports the following day also cited Len Dykstra’s recovery from being knocked down by a Ryan pitch. Dykstra followed the brushback with a single that started a three-run rally.

"The New York Mets finally found a pitch they could hit last night. In defiance of logic, legend and the Houston Astros, that pitch was Nolan Ryan's fastball." 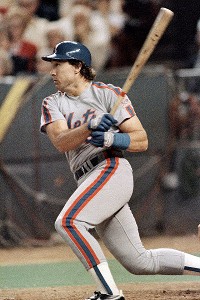 Gary Carter had a couple of big hits in the 1986 NLCS.

"I've never had that come up before tonight. It's usually easy to throw it to your catcher in that situation. But I saw him [Bass] out of the corner of my eye and decided the best option was just to go for him."

-- Ojeda in the Houston Chronicle, describing the play at the plate

Earlier this year, the blog "Amazin' Avenue" named Ojeda the 50 greatest Mets of all time, referring to him as the best pitcher the Mets had in their best season. Learn more about him here.

• Allowing 10 hits and one run, as Ojeda did, is very unusual, particularly in a postseason game. In fact, Ojeda is the last pitcher to allow at least 10 hits in a playoff game, while allowing one run or fewer. Eight pitchers did it before him, most notably Hall of Famers Waite Hoyt and Don Drysdale.

• Dykstra, Backman and Hernandez each had multi-hit games in the first-through-third spots in the batting order. That trio did that three times in the regular season, including twice in the last six weeks of the season.