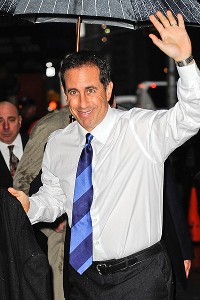 Jerry Seinfeld discussed his new dog "Jose" during an appearance with David Letterman on Wednesday.

Seinfeld told David Letterman: "You want to know why the dog is named Jose? ... The dog is named Jose because I feel like we may lose Jose Reyes, and we're trying to keep a Jose. Because I'm a Met fan. It's actually my wife's idea, which is why I love my wife -- she comes up with ideas like this. That's a marriage right there, a wife that says, 'Let's name a dog after the Mets' outgoing shortstop.' That keeps the love alive."