Source: F-Mart, Herrera on way out
10yAdam Rubin
A fans guide to abiding the LOL Mets
11dDevin Gordon
Jeff Passan answers 20 burning questions about the MLB playoffs
11dJeff Passan
What's next for the New York Mets after Luis Rojas' departure
12dBradford Doolittle and David Schoenfield
Mets move on from Rojas after 3rd-place finish
12d
Mets likely to make Rojas decision before others
17d
MLB Power Rankings: Where all 30 teams stand in the final week
17dESPN.com
Mets give Syndergaard start, shut deGrom down
18d
Your squad isn't going to the MLB playoffs? The No. 1 offseason question for each eliminated team
13dBradford Doolittle
Passan's early MLB free-agency tiers: Which stars are going to get paid this winter?
18dJeff Passan
MLB Power Rankings: Where all 30 teams stand as playoff picture comes into focus
24dESPN.com
Prospects who have taken the biggest step forward in 2021 for all 30 MLB teams
26dKiley McDaniel
Jan 9, 2012 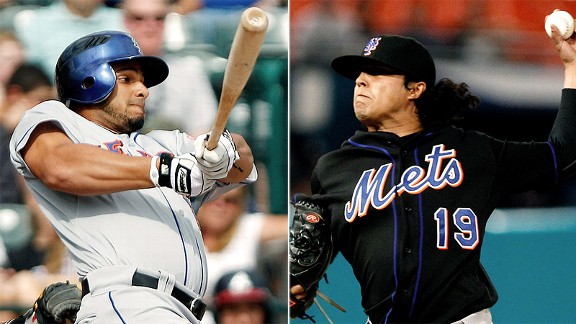 A source tells ESPNNewYork.com that Fernando Martinez and Daniel Herrera are expected to be bounced from the Mets' 40-man roster.

One-time top prospect Fernando Martinez as well as left-hander Daniel Herrera may be in their final days with the organization. A source told ESPNNewYork.com that both players are on waivers to clear the roster spots for Scott Hairston and Ronny Cedeno.

Martinez, 23, has faded as a prospect because of continual leg injuries. Even when healthy, an arthritic knee limits his mobility in the outfield. If Martinez clears waivers, the Mets can option him to Triple-A Buffalo. But Martinez's reputation could prompt another team to claim him at least to take a shot.

Herrera, 27, was one of two players to be named in the deal that sent Francisco Rodriguez to the Milwaukee Brewers -- really a salary dump to avoid K-Rod's contract vesting at 55 games finished with the Mets. Herrera had adequate numbers as a Met -- a 1.13 ERA in 16 appearances spanning eight innings -- but the organization concern is his effectiveness will fade as National League East opponents become more acclimated to his screwball.

Assuming Herrera clears waivers, he can declare free agency rather than report to the minors with the Mets.