Mejia making progress after TJ surgery
10yAdam Rubin
Carrasco has bone fragment removed from elbow
7d
A fans guide to abiding the LOL Mets
21dDevin Gordon
Jeff Passan answers 20 burning questions about the MLB playoffs
21dJeff Passan
What's next for the New York Mets after Luis Rojas' departure
22dBradford Doolittle and David Schoenfield
Mets move on from Rojas after 3rd-place finish
23d
Mets likely to make Rojas decision before others
27d
MLB Power Rankings: Where all 30 teams stand in the final week
27dESPN.com
Mets give Syndergaard start, shut deGrom down
29d
Your squad isn't going to the MLB playoffs? The No. 1 offseason question for each eliminated team
23dBradford Doolittle
Passan's early MLB free-agency tiers: Which stars are going to get paid this winter?
28dJeff Passan
MLB Power Rankings: Where all 30 teams stand as playoff picture comes into focus
34dESPN.com
Prospects who have taken the biggest step forward in 2021 for all 30 MLB teams
36dKiley McDaniel
Feb 26, 2012 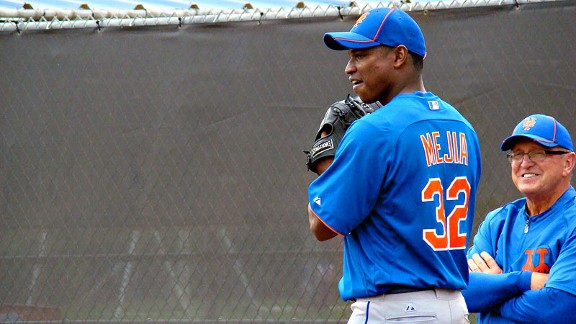 Jenrry Mejia throws from atop a mound Sunday as pitching coach Dan Warthen smiles in approval.

Jenrry Mejia, who threw on an incline last week for the first time since Tommy John surgery on May 16, 2011, pitched from the top of the mound Sunday and had a positive session.

Bullpen catcher Eric Langill squatted only a few feet in front of the plate, so the distance Mejia threw was nearly the full 60 feet, 6 inches. Mejia had been working his way up the slope of the mound since arriving in camp.

Mejia is projected to return to game action in May.

• Terry Collins spoke after Sunday’s workout about his early morning meeting with Ruben Tejada, which closes the book on Tejada not reporting early to camp.

“I’m sure he got the message,” Collins said. “There wasn’t a lot of back and forth.”

A lot of forth?

“That would be a good way to put it,” the manager said with a laugh.

Collins noted to the media how Derek Jeter perentially arrives at Yankees camp early, and that sets a tone.

“Who was the first guy in their camp? The biggest baseball star in the city of New York,” Collins said. “He does it all the time. It sends a message. If this guy does it, how come others can’t? And [Tejada] got it. He really did. He’s such a good kid. He was very upset to think he messed up.”

Collins had wanted Tejada to work at the Mets’ Florida complex all winter, with the exception of a holiday break to return to his native Panama. The manager explained his preference to Tejada at the end of last season.

Collins said there was nothing lost in translation during that end-of-season meeting, either.

“He recited it word for word to me today. That’s why I knew he heard me and understood it,” Collins said. “He just said, ‘I did all those things you wanted me to do; I just did them back home.’”

• The Mets will stage their first full-squad workout Monday. Collins will deliver an address to the team at 9 a.m. before the players proceed outdoors for the workout.