Carter T-shirts find way to clubhouse
10yAdam Rubin
A fans guide to abiding the LOL Mets
13dDevin Gordon
Jeff Passan answers 20 burning questions about the MLB playoffs
13dJeff Passan
What's next for the New York Mets after Luis Rojas' departure
14dBradford Doolittle and David Schoenfield
Mets move on from Rojas after 3rd-place finish
14d
Mets likely to make Rojas decision before others
19d
MLB Power Rankings: Where all 30 teams stand in the final week
19dESPN.com
Mets give Syndergaard start, shut deGrom down
20d
Your squad isn't going to the MLB playoffs? The No. 1 offseason question for each eliminated team
15dBradford Doolittle
Passan's early MLB free-agency tiers: Which stars are going to get paid this winter?
20dJeff Passan
MLB Power Rankings: Where all 30 teams stand as playoff picture comes into focus
26dESPN.com
Prospects who have taken the biggest step forward in 2021 for all 30 MLB teams
28dKiley McDaniel
Mar 6, 2012 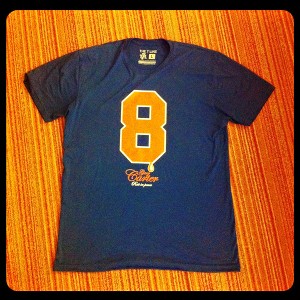 Underneath their spring-training jerseys Monday night, the Mets wore blue T-shirts with an orange No. 8 and the words "Gary Carter, rest in peace."

Justin Turner had distributed them to teammates, and said the proceeds from the sale of the shirts -- which were created by a friend unaffiliated with the Mets -- are going to the Gary Carter Foundation.

Here's an explainer from Turner's friend, Darren Meenan of The 7 Line:

"Those shirts the team were wearing were made by me for the Gary Carter Foundation. All of the profits from the sale of the shirts go to them and so far the donation is at $5,265. Here is a link to purchase the shirt. I became friendly with Turner over the past few months and I dropped off a bunch of them for him to distribute to the players. He gets total credit for passing them out."