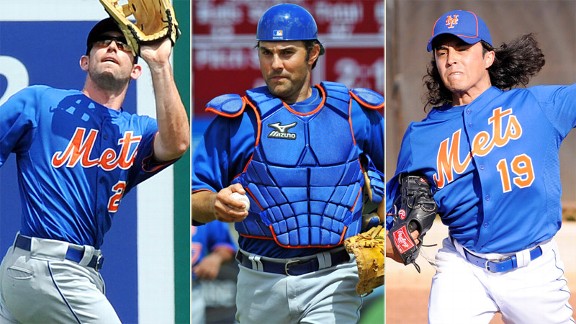 Mike Baxter, Mike Nickeas and Daniel Herrera (l to r) look like they're heading toward the Opening Day roster.

Terry Collins offered insight into prospect Josh Edgin not being selected to serve as Tim Byrdak's replacement when the manager indicated Tuesday it would be a stretch to ask Edgin to make the jump from Class A to the majors, especially since Byrdak's absence may only be the first four games of the season.

Left-hander Garrett Olson appeared the primary option in place of Byrdak, but it now appears Herrera is the likely person to claim the spot -- primarily because Byrdak's absence should be so short. Whomever is selected is likely only on the roster for four games and then would need to be exposed to waivers and outrighted, where the organization would risk losing the player. Olson instead is expected to open the season in Triple-A Buffalo's rotation.

Baxter, despite faults, has outplayed Adam Loewen in camp. Loewen is expected to open the season at Buffalo as well.

Nickeas is expected to hold onto the backup catching job to Josh Thole, which means Rob Johnson and Lucas May should form the Triple-A catching corps.

Interestingly, an organization source said top pitching prospects Matt Harvey and Jeurys Familia both should open the season in Triple-A with the Bisons, along with middle infielder Jordany Valdespin, who still is in big league camp.

An organization source said "all signs point" toward Zack Wheeler -- the other highly regarded pitching prospect -- opening with Double-A Binghamton.

Cuts have been coming on Thursdays, but may even take place tomorrow, a source said.