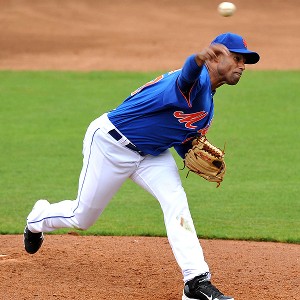 The deadline to tell Miguel Batista he has made the Mets is Friday. He's expected to receive positive news.

Miguel Batista, who should claim an Opening Day bullpen spot, will get official word by Friday.

That's the deadline by which the Mets must tell the right-hander he made the team, pay him a $100,000 retention bonus to remain with the organization in the minors, or make him a free agent. As part of the new collective bargaining agreement, players such as Batista in camp on minor league contracts need to know their fate five days before Opening Day.

Batista, in fact, is now listed as Saturday's Grapefruit League starter in place of Johan Santana.

Byrdak likely will only miss the first four games of the regular season because of the Mets' ability to backdate his DL stint into spring training, at which point Herrera would be expendable. Byrdak is due to throw off a mound for the first time this morning.

A team official confirmed Wednesday that ESPNNewYork.com's report about Mike Baxter and Mike Nickeas being solid for the roster, along with Herrera, is accurate. So assuming Andres Torres is ready for Opening Day -- no guarantee, but certainly possible -- the 25-man roster should look like this April 5 against the Atlanta Braves: