Fred Wilpon served on a committee that screened prospective Los Angeles Dodgers owners. So Wilpon said he could not discuss the yet-to-be-officially completed $2 billion sale of the West Coast ballclub.

Still, when asked Wednesday afternoon about the impact of the Dodgers’ impending sale on the value of Major League Baseball franchises including his Mets, Wilpon said: “I’m smiling, aren’t I?”

A week after Forbes valued the Mets at $719 million, sports business consultant Marc Ganis estimated Wednesday that the organization actually is worth more than double that amount in light of the Dodgers’ price tag. 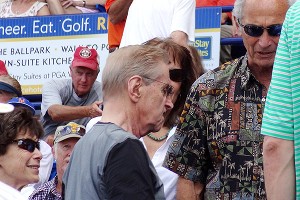 The Yankees? They’re likely worth as much as $4 billion, according to Ganis, president of Chicago-based sports marketing company SportsCorp.

That does not mean all Major League Baseball teams will see a sizable jump in value because of the impending deal for the Dodgers.

“This only relates to the top, top of the food chain,” Ganis said. “It only relates to the Yankees, the Red Sox, the Cubs, the Mets. That may be it. Maybe there is some relevance to a lesser degree to the Giants and the Padres. But no one should expect this has any meaningful impact on the Pittsburgh Pirates or Kansas City Royals or the Cleveland Indians. It’s really just the big-market clubs that have unique local broadcasting opportunities.”

Part of the reason the Mets are worth a fraction of the other big-market clubs is that they own their television network, SportsNet New York, and are essentially locked into that arrangement. The Dodgers, on the other hand, can freely solicit open bids for when their local TV package, which is up after the 2013 season, Ganis explained.

Should Mets owners ever enter a bankruptcy process -- not the immediate likelihood, since they settled the Bernard Madoff-related clawback lawsuit and received $240 million in minority investments -- the Mets may be able to fetch as much as, or more than, the Dodgers, according to Ganis. That is partly because a bankruptcy proceeding might allow the Mets to void the contract with SNY and reopen bidding.

“The Dodgers being open for bidding, they can try to set the higher bar than the Mets set with SNY,” Ganis said. “That’s why the Dodgers (now) would still probably be worth more than the Mets. But the Mets’ value does go up relative to the Dodgers.

“If you had the Mets in the same situation as the Dodgers, in a bankruptcy situation where Wilpon would be able to sell the team to the highest bidder without too much interference from Major League Baseball, the Mets would have gone for the same number if not higher than the Dodgers.

“If the Mets had the same (bankruptcy) thing, had they rejected the SNY contract and there could have been a fresh broadcasting deal, I suspect the Mets would have went for more than the $2 billion the Dodgers went for. If they kept the SNY deal, probably $1.5 billion or so would be the value.”

Of course, it’s possible the Magic Johnson-Stan Kasten group purchasing the Dodgers is an outlier that would not be repeated if another big-market team went up for sale.

"It's the craziest deal ever; it makes no sense. That's why you saw so many groups drop out," Mark Rosentraub, a University of Michigan sports management professor, told Arash Markazi of ESPNLosAngeles.com. "I don't get it. The numbers just don't work. It doesn't make business sense. Nobody came up with this number. Under the most favorable circumstance you broke (even at) $1.1 billion, with $1.4 billion getting crazy. Now you're up in the $2 billion range, which is over $800 million more than what pencils out for a profitable investment for a baseball team. If making money doesn't count, this is a great move. But now we're into buying art and I can't value art. I can just run the model numbers and this doesn't make sense."

The benefit of the Mets increasing in value as a result of the Dodgers deal is big for the team’s owners. The Mets have hundreds of millions in loans against the team. If the value of the franchise is $1.5 billion rather than $719 million, the team’s debt-to-equity ratio dramatically improves.

Still, Ganis cautioned: “It can have a positive effect. The problem the Mets have is they’re losing money every year. So it’s not just a matter of the debt-to-equity ratio, but rather they’re going to be missing all the metrics that are typically included in debt deals. They, of course, have a negative cash flow. So banks will be somewhat lenient because they’ll say, ‘OK, there’s more asset value here,’ but only if there’s a bankruptcy proceeding. And baseball, I think, is going to be very loath to let that happening again. And I don’t think the Wilpons want to go through a bankruptcy proceeding.”