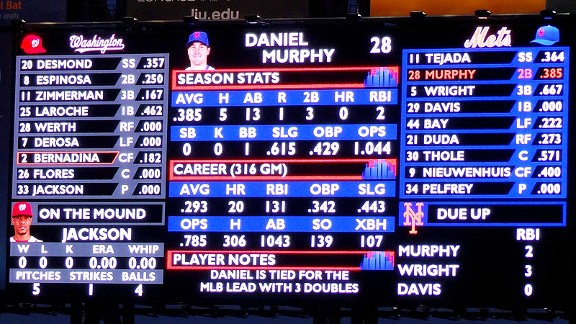 A look at the new-look Citi Field scoreboard, which has added OPS and WHIP to among its stats.

Yet their introduction to the Citi Field scoreboard this season is a first step in what may be a transformation to the in-game viewing experience in Flushing.

In Year 4 of their new ballpark, the Mets have decided to go beyond the basic statistics that have been staples for decades on their scoreboards at Shea Stadium and now Citi Field -- average, home runs, RBI, win-loss record, ERA.

Trying to more closely replicate the experience of watching on TV with a laptop or iPad opened to MLB.com’s Gameday (or ESPN.com’s equivalent), the Mets debuted slightly more advanced statistics on their scoreboard during the season-opening homestand.

The organization was partly influenced by other teams as well. The Mets studied screen grabs from other stadium scoreboards and particularly borrowed from the existing in-stadium experiences at Chase Field (home of the Arizona Diamondbacks), Coors Field (Colorado Rockies) and Turner Field (Atlanta Braves).

OPS merely is the sum of on-base and slugging percentage. WHIP is merely walks plus hits divided by innings pitched.

“There’s a lot there. It’s easily digestible,” said Mets VP David Newman, referring to the data available via computer. “Now it’s how you make it translate well in-park and make it easy to read. The goal was, if someone is coming to the park, how do you provide more content than they would otherwise have? Certainly this is a big step from the stat presentation last year.”

Vince Gennaro, president of the Society for American Baseball Research, is all for enhancing the in-stadium statistical experience.

“I've discussions with team execs on this very topic,” Gennaro wrote via email. “I think there is somewhat of a limitation as to what you can execute on the scoreboard, given the space constraints. I do think OPS and WHIP are excellent starting points. For a pitcher, his groundball/flyball ratio (or groundball rate) is very informative, as is his K-rate and BB-rate. We tend to see K’s and BB's as counting stats on scoreboards instead of rate stats (i.e., per 9 IP).

“The other way to execute in-stadium stats is thru a dedicated portal accessible thru free wifi, while a fan is in the ballpark. Many of the fans interested in such stats will have a cell phone or smartphone, so there is a lot of information that can be conveyed to these fans while using the main scoreboard to ‘entertain’ fans. Ideally, a combination of both -- some advanced stats on the scoreboard, supplemented by an in-stadium portal with additional advanced stats -- seems to be ideal.

“The Diamondbacks have a portal called Digital D-backs. I'm not sure to what degree they deliver advanced stats, but I really like the concept of communicating more info to fans who are in attendance. The TV viewing experience has become highly informative. We need to ‘up the ante’ for fans that come to the ballpark so that teams can compete, with their own telecasts, for live attendance.”

Added Bill Nowlin, vice president of SABR: “Vince's point is a great one -- serving the people at the park with the option of a menu of statistics. In theory, I guess there'd be no reason the same feed couldn't be offered to people watching the game [on TV] as an option that could enrich their viewing experience, as a supplement to what the telecasters were saying.”

An informal survey of MLB teams found a mixture of the traditional and the new.

The Yankees have included OPS and WHIP on their supplemental stats board -- just to the left of the main board -- since the new Yankee Stadium opened in 2009, the same year as Citi Field.

At PNC Park, the Pittsburgh Pirates show the vertical and horizontal break on pitches.

At Miller Park in Milwaukee, a team spokesman said, on-base percentage and slugging percentage remains “as fancy as we get.”

Chase Field in Arizona, one of the models for the Mets’ new adaptations, has displayed OPS and WHIP since installing a new board in 2008.

“We have shown some more not-so-common stats such as range factor, but that is only on occasion, and generally only for players that have exceptional range factor,” Diamondbacks director of media relations Casey Wilcox wrote via email. “We did mention that Gerardo Parra was rated as the No. 1 left fielder by Fan Graphs last season.”

Said Adam Lane, director of entertainment and productions for the Cincinnati Reds: “We have been displaying WHIP the past six seasons. In the last two years we have added OPS and OBP to our displays. A lot of this is based on suggestions from our stats coordinator, Rich Linville, and requests from our baseball operations department. We have heard from fans that they enjoy the extra stats while at the game.”

Are the Mets slow-walking fans into a new generation of stats such as wOBA, OPS+, BABIP and xFIP? Is there a danger in making things too convoluted or busy, like a thoroughbred racing board that contains all of the exacta odds?

“You gauge fan reaction,” Newman said. “The big question: What is understandable and what is digestible for hardcore fans and people just coming for the first time, so it’s not intimidating.”