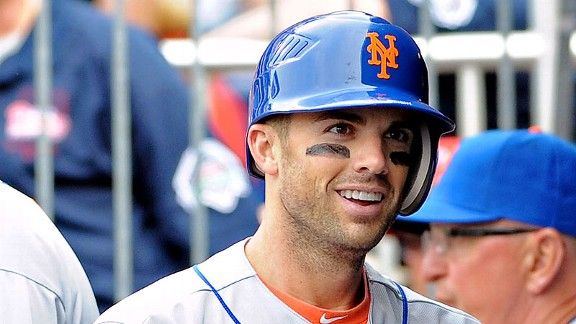 David Wright has performed in a manner worthy of smiling about in 2012.Welcome to the second edition of "The Week in 'Met'rics," where we celebrate all that is amazin' and some of what is not about Mets statistical and historical accomplishments.

Our biggest resource in this search is the Baseball-Reference.com Play Index, a source of much entertainment and amusement.

It was a great week of accomplishments for David Wright, who matched Darryl Strawberry’s career RBI mark on Wednesday. The two each have 733 RBI.

Wright became the first player in franchise history to reach base twice (via hit or walk) in each of his first nine games of a season. The last player to do so for any team is former Met Mike Cameron, who had such a streak for the 2002 Mariners.

The Mets hit a first-inning home run in each of the three games in their series against the Phillies.

Wright had one of those on Saturday, in his first game back from his finger injury, and in hitting one tied an obscure Mets record in the process.

Wright now has 36 career first-inning home runs, tied with Strawberry for the most in Mets history.

Leaderboard of the Week
Most First-Inning HR with Mets

Wright’s five first-inning home runs are the most by any Met at Citizens Bank Park. The only other Met with more than one is Jose Reyes, with two.

Also in that game, the Mets recorded their first stolen base of the season (Mike Baxter). The Elias Sports Bureau notes that the Mets' first steal coming in their eighth game was the third-longest drought to start a season in franchise history. It took 17 games to nab a steal in 1963 and 12 games in 1962.

Jonathon Niese pitched scoreless ball over 6 2/3 innings. The Elias Sports Bureau noted that Niese became only the second Mets pitcher in the last 30 seasons to start and win his first two appearances in a season, shutting out the opposition through six innings in each. The other was Frank Viola in 1990.

The bizarre pitching line of the week belonged to Manny Acosta, who allowed four runs and one hit in relief in the Mets loss to the Phillies on Sunday.

The Mets have had 19 instances of a pitcher allowing four or more runs on one hit or no hits. This was the third such occurrence in the last 12 months. Dillon Gee and Jason Isringhausen each had such a line last season, but prior to that, no Mets pitcher had such a line for nearly 10 years!

The last to do so was Armando Benitez against the Braves in June, 2001.

Also of note was that for the first time in his Mets career, reliever Jon Rauch allowed a hit. Rauch’s streak of hitless appearances to start his Mets career ended at five. That matched Jaime Cerda (2002) and Roberto Hernandez (2005) for the best such Mets career-starting streaks.

Monday’s win raised the Mets record to 7-3. We noted that the Mets have started 7-3 on seven previous occasions, and on each of those, they’ve finished the season at least 10 games over .500.

Some other 10-game milestones:

• On the downside, the 85 whiffs by Mets hitters is the most the Mets have ever had in their first 10 games.

Johan Santana allowed six runs in 1 1/3 innings in a 9-3 loss to the Braves on Tuesday. It was the shortest start of Santana’s career.

Santana is the fourth starting pitcher in Mets history to give up at least six runs while recording four or fewer outs against the Braves. The other three are Mike Scott (1982), Bobby Jones (1997) and Pat Misch (2009).

The Mets gave up 14 runs to the Braves in their series-finale loss on Wednesday. It’s the fourth time in Mets history that they allowed that many runs in a game in Atlanta, the first since 2004, when they yielded 18.

Vintage Metric of the Week

The Mets beat the Braves four times in a row this season, prior to losing to them in the final two games of their series.

When was the first time the Mets beat a team four times in a row?

That would be the inaugural season of 1962. The Mets won the first four games the franchise ever played against the Cubs, with three of those games being decided by one run. They would finish 9-9 against the Cubs that season, 31-111 vs everyone else.