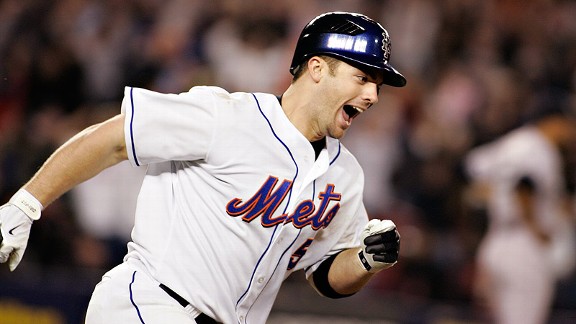 David Wright knew when he got his game-winning hit against Mariano Rivera that this was a memorable moment in what would be a prominent major-league career.With David Wright on the verge of breaking Darryl Strawberry’s career record for RBI as a Met, we thought we would go back and remember a half-dozen of the most memorable RBI of Wright’s career, with the help of the archives of New York’s daily newspapers.

Wright’s first RBI came five games into his Mets career via his first major league home run, a solo shot to left center on a 3-2 pitch against the Montreal Expos and pitcher John Patterson in the second inning.

Though this was a moment to remember for the Mets and their fans, this was one of the ugliest games of the Art Howe era. The Mets would lose that day by the football-like score of 19-10, and the headlines were harsh in the newspapers that day. The team was pegged as playoff pretenders.

"It was a night you want to forget," Howe told the media afterwards. "That's for sure."

Though not for the soon-to-be RBI king.

Wright Way to Play: Wright’s 14 RBI against Jamie Moyer are his most against any pitcher.

Wright has had his share of big hits for the Mets, the first of which came a few weeks after his first RBI, at Coors Field against the Rockies.

With the score tied in the ninth inning, Wright hit a two-run home run off submarine hurler Steve Reed to give the Mets a 4-2 victory. Though the win proved to be meaningless to the final standings that season, getting such a significant hit was a big deal to Wright.

“It’s what you dream about,” Wright said describing the thrill of the moment.

Wright Way to Play: Wright is the Mets all-time leader in game-winning RBI with 101. Piazza ranks second with 89.

Ask David Wright for his favorite RBI, and he’ll tell you that it’s is the one he got against Mariano Rivera and the Yankees.

“One day I can tell my grandkids about my game-winning hit off the greatest closer of all time,” Wright told Mike Mazzeo during the weekend.

Though it doesn’t quite match up with Matt Franco’s game-winning hit against Rivera, this might be the next-most dramatic win over the Yankees in club history.

Seven batters into the game, the Mets trailed the Yankees, 4-0. But they would rally against Randy Johnson, with three runs in the home first, and they’d tie the game twice by the end of the fifth inning.

Neither team would get a hit through the sixth, seventh, and eighth innings. After Billy Wagner struck out the side in the top of the ninth, the Mets worked some magic against Rivera.

Paul Lo Duca doubled, and Carlos Delgado was intentionally walked with two outs in front of Wright, who worked a 2-2 count, then hit a fly ball over the head of Johnny Damon for a hit that brought home the winning run.

In the midst of frittering away a seven-game lead with 17 to play in the finals days of the 2007 season, the Mets briefly snapped out of their funk, winning three straight against the Marlins. The last came on on Wright’s go-ahead 11th-inning single after the Mets had blown a ninth-inning lead.

Our Adam Rubin, then writing for the Daily News, noted the Florida crowd started chanting “M-V-P” for Wright after that hit. Said Marlins manager Fredi Gonzalez afterward: “Wright’s hotter than a firecracker.”

The RBI is forgotten primarily for this reason: The Mets season went up in flames. They lost six of their last seven games and lost the NL East on the final day of the season.

Wright Way to Play: Wright’s 87 RBI against the Marlins are his most against any team.

Wright has had a couple of big hits on the West Coast in his Mets career.

With the Mets in a state of turmoil after the firing of manager Willie Randolph, Wright got the game-tying hit with two outs in the ninth inning against Angels closer Francisco Rodriguez. Damion Easley would hit the go-ahead home run in the 10th inning to give Jerry Manuel his first win as Mets manager.

The hit was a reward for both the new manager and his player, who had gotten to the ballpark in Anaheim that day for several rounds of early work. Manuel pitched to Wright, instructing him to wait patiently for the pitches he could drive. The work paid off.

Wright had never hit a walk-off home run in his professional baseball career until he hit one off former Met Heath Bell and the Padres. It took the Mets blowing a lead for him to get it, but it was quite satisfying nonetheless.

"I'm always celebrating everyone else's (walk-off home runs)," Wright said. "But to be the one that jumps into the pile at home plate is pretty fun."

Wright Way to Play: Wright’s seven game-ending RBI are tied with Rusty Staub for second-most in Mets history, one behind Kevin McReynolds.